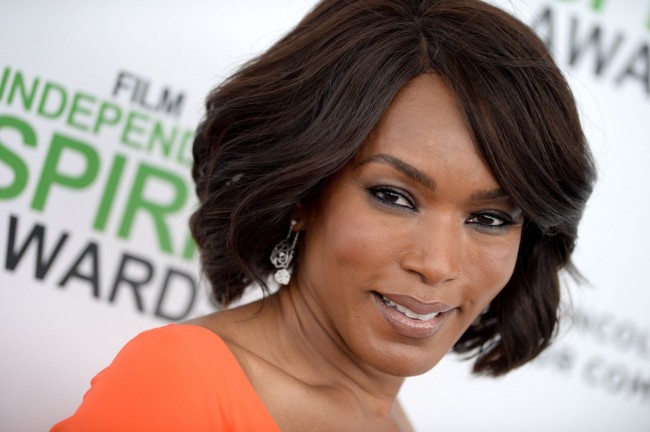 Bobbi Kristina Brown, the only child of the late Whitney Houston, has been spitting venom at actress turned director Angela Bassett for not casting her to play her mom in the upcoming Lifetime biopic on Houston’s life. Bobbi Kristina took to social media to spew some unkind words about the project and took particular aim at Bassett for not giving her equal casting consideration.

In a rant of insults via twitter, Bobbi Kristina referred  to Angela Bassett as Angela “Bassketcase,” “a man,” and a B*tch. The 21-year-old Brown was furious for Bassett’s oversight and lashed out after learning of Bassett’s reasoning for not considering Houston’s only offspring.

In an interview, Angela Basset explained to reporters that she did not cast Bobbi Kristina Brown for the simple fact that she is “not an actress.” Bassett continued that with a very short shooting schedule of only 21 days, an experienced actress who has the technical acting chops and can handle the pressure of carrying a film with extreme emotional depth is what is required to pull this project off. It was earlier reported that Bassett tapped actress and model Yaya DaCosta to play the role of Whitney Houston. Bassett and Lifetime executives believe DaCosta, a runner-up on the third season of America’s Next Top Model,  certainly captures the beauty of the late Whitney Houston and also has the acting background and experience to pull off the demanding role. Yaya Dacosta’s acting resume includes a long-standing stint on the ABC soap-opera All My Children, a small yet important role as Mark Ruffalo’s girlfriend in the feature film The Kids are Alright and most recently was seen in a supporting role in Lee Daniels’ The Butler. In the Lifetime television movie titled I Will Always Love You: The Whitney Houston Story, DaCosta will chronicle the superstar singer’s whirlwind romance and marriage to R&B bad boy Bobby Brown and the series of events that led to their subsequent divorce. According to reports, the role of Bobby Brown will be played by actor Arlen Escarpeta.

Bobbi Kristina is not the only family member to be negatively vocal of the made for TV biopic. It has been reported that the Houston estate believes that a proper tribute to Whitney’s talent and legacy deserves to be shown on the big screen as a feature film and not as a television movie of the week. 55-year-old Angela Bassett, who won a Golden Globe Award and was nominated for an Oscar for her portrayal as Tina Turner in 1994’s theatrical release What’s Love Got To Do With It will be making her directorial debut with this project. When questioned about the Houston family’s comments, Bassett replied that a television movie that comes into homes gives true Whitney Houston fans access to the story and for those who are curious about the film will be able to catch it without having to leave their homes and pay to see it at a local cinema.

While Angela Bassett has not directly responded to Bobbi Kristina’s tangent, Bassett considered Whitney Houston a friend and said she is working very hard to honor the memory of her dear friend. Bassett and Houston worked together back in 1995 in the popular film based on New York Times best-selling Terry McMillian novel Waiting to Exhale.

I Will Always Love You: The Whitney Houston Story is slated to air some time in 2015 on the Lifetime Network.