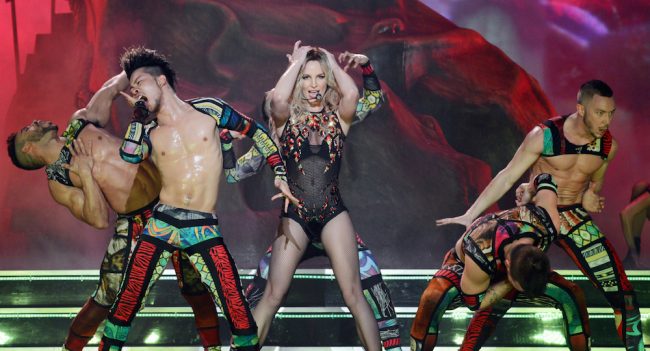 By industry standards singer Britney Spears still has not been able to live down her most recent album, Britney Jean, Released in November of 2013, it seemed to bomb on impact, debuting at number four on the Billboard Top 100 album chart and falling off of the list only weeks after. It charted even lower in the United Kingdom and has been officially noted as being her worst selling album to date. One of the many issues with the album seemed to be the over processed vocals of certain tracks. One in particular, the album opener Alien, finds itself back under heavy scrutiny after an untouched demo version of the song hit the web earlier this week. Spears’ fans are still confused as to what went wrong and oddly enough, the producer is as well.

The story of Alien has seemed to haunt Spears and her fan base almost from the get-go. With lead production done by William Orbit, who has worked with many other artists including Madonna and Pink, the song was said to be a stand out on the Britney Jean album. However, when listeners first heard the completed version there was a noticeable “vocal glitch” midway into the second chorus.

According to Orbit, it was the fault of Black Eyed Peas front man, will.i.am, who produced the entire Britney Jean album. Orbit claimed via his Facebook page that there was “a long story behind” the error; one that he would “love to tell” but he was choosing not to.

The demo that leaked on Monday was said to be one of many that was recorded while Spears’ warmed up. While her vocals are definitely not the strongest, the “glitch” is obviously not present, which loans more credibility that it was not the fault of Orbit. He spoke on the demo leak on Tuesday and stated he felt the people behind it were more about blasting Spears’ vocal ability than acknowledging the truth behind Alien.

“[Untouched demos are] not supposed to be shared with millions of listeners,” he stated in a recent Facebook post. “Whoever put this on the internet must have done so in a spirit of unkindness.”

Even if the song was meant to save anything related to the Britney Jean era, it might not have worked anyway. Although it was repeatedly teased by Spears’ record company, RCA, and even Britney herself (as seen during her E! Channel special, I Am Britney Jean), the planned release for Alien was seemingly cancelled after the less than “stellar” album sales. Only two singles, Work B*tch and Perfume, were made to carry the album through to success. Ultimately, that plan failed.

Months ago, album execs also brought forth more rumored single releases by ordering remixes for the T.I. assisted track, Tik Tik Boom, as well as the song Now That I’ve Found You, which appears on the deluxe version of Britney Jean. However, neither song was ever planned for radio release. Spears is currently on break from her Piece of Me residency show in Las Vegas. She is set to return in August.

3 Responses to "Britney Spears: The Outworldly Confusion of ‘Alien’ [Video]"