European Union Muslims expressed mixed reactions to the EU Human Rights court vote to uphold the current ban on the burqa in France on Tuesday. The full-face burqa and the less conservative niqab have drawn quite a bit of controversy all over Western Europe since France first banned the garments in 2011, with both sides of the aisle claiming human rights as their main argument. This latest decision from the EU high court will have far-reaching effects for other countries which have banned the burqa, not the least of which will be further highlighting the cultural divide between Western Europeans and Arab minorities in Europe, and defining how each of those groups see human rights.

France was the first country in the EU to ban the burqa in April 2011, followed soon after by Belgium. Since then, Italy, Switzerland, Denmark, areas of Russia and even Turkey have also passed similar laws. Most of the times these laws have been challenged, courts have found in favor of the ban. This most recent ruling was unique because it came from the European Court of Human Rights, which acts like the Supreme Court on issues of this nature. Just like a Supreme Court ruling, the implications of this decision could affect legislation surrounding religious expression in all the EU’s member states. 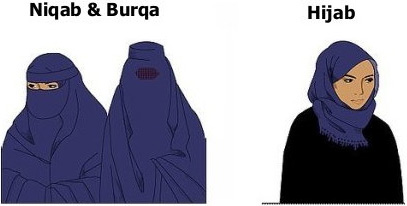 The appeal to the ban in France was filed last November by a French Muslim woman who claimed her rights to practice her religion were being violated, as the ban states women may not leave their homes and enter public space with their faces either fully or partially obscured. This is why the ban includes only the burqa and the niqab, and not their face-exposing counterparts, the Hijab, the Al-Amira, the Shayla, the Khimar and the Chador. French and international (mostly western) human and women’s rights activists, however, argue that the ban on the burqa and niqab are liberating women from the oppression of these garments by their male-centric culture, and this has little to do with religion.

The law French law as it currently stands fines any woman wearing a burqa or niqab 150 euros (about $205). A much steeper fine of 30,000 euro can be exacted on anyone who has been proven to have forced a woman to wear a burqa. Since the law’s implementation, there have been about 600 fines for wearing the burqa, but no cases for forcing the wearing of it.

While the European Court of Human Rights, which upholds the European Convention on Human Rights, has refused to weigh in on the issue of face coverings in public spaces in the three years since France instituted its ban, this case was referred to the court’s very highest chamber, the Grand Chamber. The main argument of the complainant was aimed at Articles 10 and 14 of the European Convention on Human Rights, which detail the EU’s position on freedom of expression and the prohibition of freedom of expression. The complaint states that in their law banning these “conspicuous” religious symbols, France asserts a foregone conclusion by the French state that the wearing of the burqa and naqib is a violation of the rights of Muslim women. Herein lies the crux of the issue: whether the right to decide whether a person’s rights are being violated should fall to the individual or the state.

The Muslim woman who brought the case to the high court insists that no one in her family or her religious community has ever pressured her to wear the burqa, and that it was her own independent choice. France currently has about five million Muslims, but only about 2,000 women wear the full burqa with the mesh covering their eyes, and the case also asserts that with so few women in France wearing the garment, it can hardly be an offense to the values of French society, and if the women who wear the clothing in question feel that they are choosing to do so, the case asserts that the law is taking away that choice.

In the United States, the First Amendment which protects freedom of expression in all its forms, religious or otherwise, is seen as the most important of the Amendments to the constitution. The law is very clear and very liberal, and most Americans have a deep-rooted understanding that their rights to express themselves in whatever fashion they choose will always be protected and upheld. In European legislation and culture, things are not always so clear. There are many examples throughout Europe where certain ways of expressing oneself may be deemed inappropriate to the upholding of the values of society. In Germany, for example, where the capital Berlin has one of the largest and most thriving controversial and outsider art communities in the world, Nazi imagery of any kind is banned. The ban on the burqua, however, does not only have to do with protecting the human rights of conventionally held society, but also with creating a very clear-cut secularization of public space. In fact, in public schools in France, not only the burqa and naqib, but all forms of headscarf are banned. Similarly in England, the courts allowed each public school district to decide its own rules on headscarves, and Denmark has even gone so far to ban any religious symbols, including crucifixes, Jewish skullcaps and turbans. Thus, in many European countries, there has been a precedent set where oftentimes the religious rights of individuals and minorities have taken a back seat to what some states see as the right of the established society to go unmolested by religious symbols or expressions which are seen as a violation of the commonly held perception of human rights.

In its decision, the European Union court upholds that in the France and other countries in the EU, the wearing of the burqa and the naqib were seen to be a violation of the perception commonly held by the public that this act violates women’s right as a whole, and thus votes for the ban to remain in effect. While there have been protests, polls of both French and other EU citizens seem to agree with the decision that the ban is in keeping with the European Convention on Human Rights, and that women who wear the burqa are violating the rights of women as a whole.

The international community outside of the EU has been divided, as has the Muslim community on The Continent. Clearly a human rights argument can be made on both sides, and it seems there can be no answer to which both camps can agree. For now, the European Union high court’s vote in favor of France will be upheld, but this most likely won’t be the last case heard on the burqa ban, as the decision has opened the doors for even wider debate among the people and governments of the 47 member states in the European Union.