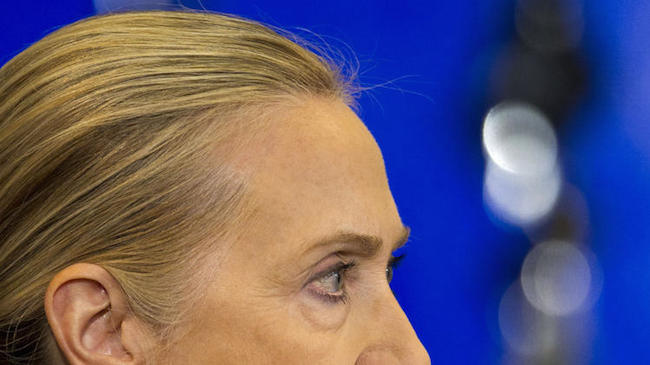 The likely 2016 presidential contender, Hillary Rodham Clinton, receives fees of approximately $200,000 for each speech she charges for. One such event, planned for October at the University of Nevada Las Vegas (UNLV), will occur in the wake of students upset at facing the latest in a series of tuition hikes. Through their anger some have announced that, unless Clinton gives the speech for free by giving her $225,000 fee back to the school, they will stage a protest.

Nevada’s Board of Regents last month approved an undergraduate tuition increase of 4 percent. The last increase, in 2011, was 8 percent.

Clinton has not said whether or how she would respond to the UNLV students’ demands. However, she was clear that all the funds that come her way from colleges go entirely to her family’s charity, the Clinton Foundation.

The website for the Clinton Foundation describes the organization as providing support intended to better global health, increase opportunities for women and girls, minimize childhood obesity, create economic opportunities and assist communities in addressing negative impacts from climate change. Each of the three Clinton family members are board members and are thus compensated for this task. However, the amount they each receive is unknown, as the online version of the organization’s annual report is cut off where the Financials section begins. The Better Business Bureau (BBB) has the Bill, Hillary & Chelsea Clinton Foundation in its “Standards Not Met” category. Specifically, the Foundation does not currently meet the BBB’s standards for Board Oversight, Board Meetings and a sufficient Effectiveness Policy and Board Compensation.

Hillary Rodham Clinton described for ABC News how the speaking compensation fees flow, saying the funds move from one specific university’s foundation to another one (The Clinton Foundation). It is not clear if Clinton intended to describe a direct funds transfer or if such funds first go through an account of her personal ownership before landing in the target account owned by her foundation. One of Guardian Liberty Voice’s sources reports that “every penny” of Clinton’s speaking fees have gone to her family’s charitable foundation and another specifically says that only the funds earned from college speeches have been so directed.

Speaking about her personal finances, Hillary Rodham Clinton told an interviewer last month that upon Bill Clinton’s departure from the White House in 2001 the couple was “not only dead broke, but in debt.” ​The Washington Post conducted a review of the family’s finances and reported that Clinton’s husband (former U.S. President Bill Clinton), as a result of giving 542 speeches over the 12 years of January 2001 to January 2013, received $104.9 million in speaking fees. This average rate-per-speech of $191,000 is similar to that of his wife’s. Although half of Bill Clinton’s speeches during this time were given in the United States, the majority of the $104.9 million came from engagements in other countries.

Another recent politician to receive scrutiny for speaking fees was former Alaska Governor Sarah Palin. Students and critics in 2010 wanted her confidential contract with California State University to be public so that California taxpayers would know the amount of payment she was promised for a future speaking engagement. The controversy ignited a lively discussion about the public’s right to know and government transparency.

Late last year, President Barack Obama identified income inequality as the “defining challenge of our time.” This may indeed be a true statement of belief from the U.S. President, however, an Associated Press-NORC Center for Public Affairs Research poll released several days later reported that only 5 percent of American respondents agreed that the issue was a major problem in need of attention. Of those 5 percent who did name income inequality as a problem, 93 percent said they were “not at all or only slightly confident” that government could make actual progress on the issue in 2014.

At least one poll says Americans are not interested in income inequality and Clinton says some or all of her speaking fees are donated to her personal foundation. Polls and donations aside, the fees Clinton charges for speaking at one event are four times the median American income of $51,000.