Magnetic Field of Earth Weakening a Sign Poles Are Flipping 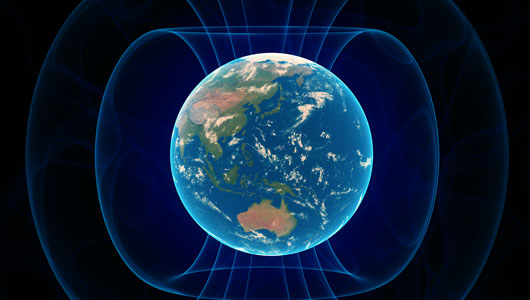 According to LiveScience, the magnetic field of Earth is produced by an iron core at the center of the planet and it extends above Earth’s surface 370,000 miles. One of the reasons that Earth’s magnetic field is important is that it is like a defensive force field, blocking out much of the radiation bombarding Earth daily from space and the sun.

Deep ocean core studies have confirmed, according to NASA, that the Earth’s magnetic poles reverse on a relatively frequent basis. They usually switch anywhere from 200,000 to 300,000 years. As it has been 700,000 years or so since a flip has taken place, Earth is overdue for one. The weakening magnetic field might be a sign that the switch will occur sooner, rather than later.

However, the new data from Swarm indicates that Earth’s magnetic field is actually currently weakening at a rate of five percent every decade instead of century. That rate is 10 times faster than the scientists had allowed for in their calculations about when the next flip would happen.

According to the observations made by Swarm, the switch or flip of Earth’s magnetic poles is already underway. Magnetic north is slowly headed to the south, in the direction of Siberia. Still, the switch will “take many hundred if not a few thousand years,” as Swarm’s mission manager, Rune Floberghagen, stated in an interview with LiveScience.

While past switches of Earth’s magnetic poles have not resulted in signs of radiation damage to life occurring or mass extinctions, Earth’s weakened magnetic field will let more radiation than normal get through the protective barrier. This could result in disruptions to the world’s communications networks and power grid.

Other information is also collected by the three Swarm satellites, about Earth’s oceans, ionosphere, crust, mantle and core. The data that the satellites are gathering could lead to improvements in locating natural resources, predicting earthquakes and improving navigation systems.

Though the data from the three satellites known as Swarm shows a definite weakening of Earth’s magnetic field over even just the past few months, a complete flip of Earth’s magnetic poles will still likely not occur for at least around a couple of hundred years, according to LiveScience.

Earth’s magnetic field is weakening rapidly now, a sign that the poles are in the process of flipping. Whenever the shift of the magnetic poles is complete, the planet’s magnetic field will presumably be as strong as it ever was and will continue to protect the planet’s life from radiation. The three ESA space satellites, known as Swarm, have collected data that indicates the planet’s magnetic field is weakening at a faster rate than it has been. This is not a sign that the end of the world is eminent, however, even if the flip happened at a much faster rate, such as within a decade, according to DigitalJournal.com.