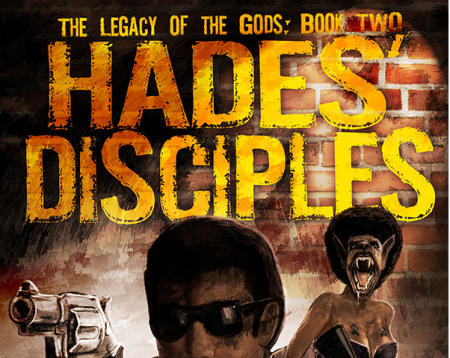 Michael West is a popular horror novelist who writes action-packed, page-turning and addictive stories, in this exclusive interview with the Guardian Liberty Voice (GLV), Michael talks about Hades’ Disciples, Vampires Don’t Sparkle and more. West lives in Indiana and started writing about his area of the world, specifically Harmony, perhaps the scariest section of the state, and then moved into other parts of the country, the east coast and further afield. On July 29, the author corresponded with Michael Smith who conducted an interview via email with the busy writer.

The Indiana horror maestro has written three books about Harmony, two about “The Legacy of the Gods”, with another two scheduled, and a short story collection of his own works, Skull Full of Kisses, which included his award winning short story Goodnight. He also has the single short story “For the River Is Wide and the Gods Are Hungry,” and in his spare time, he edited the short story anthology Vampires Don’t Sparkle. This last book, donated a part of its proceeds to cancer research.

GLV: Firstly, he Guardian Liberty Voice would like to thank you for taking the time to have a chat with us. The last time we talked (Michael Smith has another exclusive interview with Michael West in 2013 just after he released Vampires Don’t Sparkle) you were working on Hades’ Disciples. That is now finished and being appreciated by fans, so are you taking a well deserved break or are you moving on to your next project and providing more fantastic thrills?

Michael West (MW): I took about a month off after I finished Hades, but now I am on to other projects. I’m writing “Zeus’ Warriors,” the third “Legacy of the Gods” novel, and I’m readying my next short story collection, “Straightjacket Memories”, for release this fall.

GLV: Your first book in the Harmony series was The Wide Game followed with another two stories, Cinema of Shadows and Spook House. In Goodreads, it says that you have four books in the series, does that mean you are going back to Harmony?

MW: Yes. After I finish with “Zeus’ Warriors,” I’m going back to Harmony for “Field of Screams.” It will be a grand finale to the series.

GLV: Can you give us any clues as to the nature of book number four i.e. the finale?

MW: It will bring the series full circle, back to the cornfields and Mondamin.

GLV: Will we be seeing any familiar faces with the new book?

MW: Oh yes. The novel will feature characters from the entire series. I think my faithful readers will be quite happy with it. At least, I hope they will be.

GLV: Leaving Harmony for a moment and looking at the “Legacy of the Gods” series, your third book, which you stated you are currently working on, is titled Zeus’ Warriors, when is that slated to be published?

GLV: Having just finished Hades’ Disciples, it was wonderful that a lot of the action took place outside of the U.S. will the third book continue this trend?

MW: Oh yes. The Legacy books deal with threats to the entire world, so it is only natural that the action is on a global scale as well.

GLV: The second book in the “Legacy” series ended with a real cliffhanger. The character in question, we won’t mention any names, is a very popular one. How difficult was it for you to write those final sequences?

MW: I knew it was coming, of course, but even so, when it was time to write those last few scenes, it was quite hard for me to get the words out. The character in question is one of my favorites as well, and I wanted to protect them, just as I would one of my flesh and blood children. What happened had to happen, however, and I am very pleased with the feedback I’ve received from readers who were as shocked as I was. 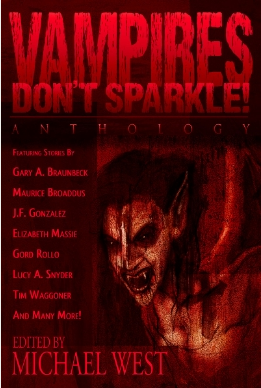 GLV: Leaving the “Legacy” series, let’s talk about Vampires Don’t Sparkle. The idea behind the short story collection was to get away from a certain author’s trend of making these blood-sucking creatures a bit of a joke. I certainly enjoyed the more “earthy” vampires featured in the short stories. How much did you enjoy putting together the anthology?

MW: I had an absolute blast! It was invitation only, as a vampire anthology should be. I was afraid that I would get a lot of similar stories, but no two were alike. There were some very original takes on the age-old archetype, and I could not have been happier with the way it turned out.

GLV: Some of the brightest sparks in the genre contributed to the book, do you have any favorite stories, ones that really stuck with you?

MW: I loved them all, obviously, or they wouldn’t have made it into the final collection, but there were a few standouts that I knew right away would be a part of the project. Tim Waggoner’s “What Once was Flesh” was one. Another was “I F**k Your Sunshine” by Lucy A. Snyder. But probably my favorite tale of the bunch was Douglas F. Warrick’s “Rattenkönig.” I thought that was just so very original and creepy. I just loved it!

GLV: Of course part of the proceeds went to cancer research, because of the death of a good friend, would you care to tell our readers about it?

MW: I lost a very good friend, and one of the most amazing people I have ever met in my life, Sara J. Larson, to a rare form of breast cancer. Since the early days of my career, Sara had been my biggest fan and my harshest critic. She read the first draft of everything I wrote. I mean everything. Every short story. Every novel. And her honest and thorough critiques impacted each work, leaving permanent impressions, like footprints on the moon. I think about her every day, and there are times when I know she is there with me. She’s still my biggest fan and my harshest critic, and I still ask myself what she would think of my stories as I write them.

GLV: Do you know just how much the book has raised for the research charity so far?

MW: I don’t have the exact figure in front of me, but it has been a few thousand dollars. I only wish it could be more, but every bit helps, and I am so grateful to my publisher, Seventh Star Press, and everyone involved in the project, for agreeing to donate the monies to such a worthy cause.

GLV: The stories in the anthology were great. A real throwback to the bloodier and more evil vamps of old, any chance of a second collection?

MW: Thank you. Yes. Continuing with the theme, I was joking with my publisher that the next one needs to be a werewolf anthology called Werewolves Wanted (Shirtless Whiners Need Not Apply). We’ll see what happens.

GLV: What, apart from the third book of the “Legacy” series are you working on right now?

MW: I have my second short fiction collection, “Straightjacket Memories,” due out in a few months, and I’m working on some more short stories for various anthologies. I’m also making the rounds, doing signings and attending various conventions.

GLV: Yes. You have been hitting the conference circuit, signing books and meeting celebs from the horror world for a while now. What are some upcoming cons you’ll be attending?

MW: I’ll be doing a signing Saturday, August 16th, at GenCon, and I’ll be at HorrorHound Weekend in Indianapolis this September as well. I’ll also be at a few cons that deal with writing and readers: Imaginarium in Louisville, KY, and Context in Columbus, Ohio, both in September. Faithful readers can go to my website, www.bymichaelwest.com, to keep up with my ever-changing schedule.

GLV: Going back to Harmony again, for Cinema of Shadows you went on a “ghost hunting” trip with professionals, I believe. Have you been on any more and more importantly, would you like to?

MW: I haven’t been on any official ghost hunts, but I did spend the weekend at a writers’ retreat at the haunted Woodcarver’s Building in Converse, Indiana. I stayed in a room that was once part of a brothel, and I wasn’t alone. I had a female ghost in there with me who liked to type on my laptop. It was a very freaky experience, and I loved every minute of it!

GLV: I know that you are a keen fan of world cinema, in the area of horror, and of horror films and science fiction in general. What films have really gotten you excited so far this year?

MW: I loved “Dawn of the Planet of the Apes.” I thought that was just brilliant! Someone needs to give Andy Serkis an Oscar! I also loved “Snowpiercer” and “The Raid 2,” and I thought “Captain America 2: The Winter Soldier” was just about the best comic book film I’ve ever seen. Well, so far anyway.

GLV: And what films are you most excited to see?

MW: I’m really looking forward to “Guardians of the Galaxy.” I had the good fortune to watch 17 minutes of footage in IMAX 3D and was just blown away by it. So excited to see the whole film! I’m also anxious to see the final Hobbit movie, and the “Cabal Cut” of NightBreed that comes out on Blu-ray in a few months. I’ve already ordered one of the limited edition copies. I saw the raw footage several years ago, but I can’t wait to see it all edited together the way it was meant to be!

GLV: Speaking of movies, you write in a very cinematic style, which one of your books would you like most to see made into a film?

MW: Oh my… I think all of them would make good films, but I think I would most like to see my “Legacy of the Gods” series up there on the big screen. With all the action, creatures and suspense, I think it would make for an incredible cinematic experience.

GLV: Before we leave, Cinema of Shadows (which is the first of your books I read and still one of my favorites) is now a bestseller, as in number one in the Horror/Occult fiction charts. How excited are you about that?

MW: It was very exciting. Very surreal. Growing up, I dreamed of having a bestselling novel, and to see my work there at the number one spot, to see it outselling Stephen King’s Shining sequel, “Doctor Sleep,” at one point…it was just beyond belief, and I’d like to thank all my faithful readers out there for their support. It really does mean the world to me.

The Guardian Liberty Voice would like to thank Michael West for taking the time to give us an exclusive interview and to talk about his latest book Hades’ Disciples, Vampires Don’t Sparkle and more. His latest book, Hades’ Disciples is out in paperback and eBook format now. Read any of Michael’s brilliant books and become a fan, we dare you.