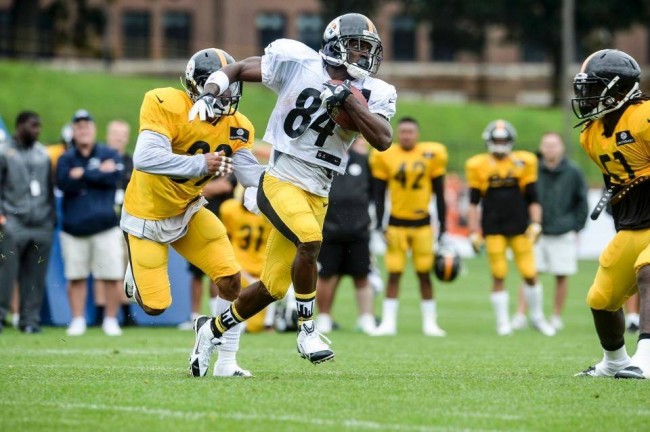 Pittsburgh Steelers – After 2013, the Steelers need a running back overhaul. The ground game had not exactly been the team’s strength in the past few years, but ranking 27th in the NFL last year meant lots of guys had to go. Top runner LeVeon Bell is the lone survivor, and now the team hopes former New England Patriot LaGarrett Blount and the fastest rookie in the league can get them out of the AFC North with a better record than 8-8.

LeVeon’s first-year stats, while solid, were not particularly notable. He only averaged 3.5 yards per carry, but also served as a workhorse with an average 24 touches per game, while proving he could add value to the passing game with 45 catches. Behind him on the initial training camp depth chart is Blount, who last year split carries with Stevan Ridley and earned nine touchdowns in the process. Blount averaged a healthy 5.0 yards per carry and should be a valuable change of pace back, especially around the goal-line.

Behind Bell and Blount, the third spot is up for grabs, but one player is running ahead of the pack, literally. The Steelers’ 2014 third round pick was Kent State’s Dri Archer. Archer is the fastest player on the team, possibly the fastest player in the NFL, and posted the second fastest numbers at the Scouting Combine…of all time. He is small – 20 pounds lighter than Jamaal Charles – and played in the lightweight Mid-American Conference, but his possible upside is so great, it may be impossible not to let him see the field this year.

Behind Bell, Blount, and Archer are names like Miguel Maysonet, Tauren Poole, Alvester Alexander and Jordan Hall, an interesting group only because last year the team had Jonathon Dwyer, Felix Jones, and LaRod Stephens-Howling – all league veterans. Certainly the Steelers are saving money, but one injury and the team could be in a tight spot.

As if on cue, LeVeon Bell tweaked his hamstring and had to leave practice early over the weekend. There is no timetable for his return. 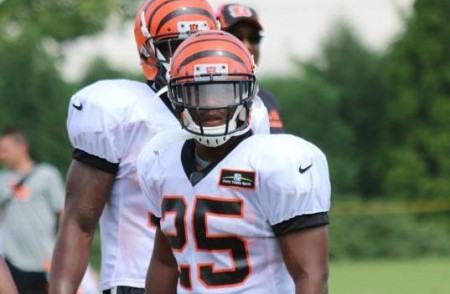 Cincinnati Bengals – The 2013 AFC North champions have started training camp with one of the NFL’s rising young stars, a notable number two rookie, and question marks about who should back them up.

Giovani Bernard is the unquestioned number one, and likely a more important offensive weapon for the team than A.J. Green. Not only is he a compact and explosive runner, he can catch the ball as well as any back in the league. The team is planning to make him a significant part of their passing attack, possibly even lining him up at wide receiver for certain plays.

Rookie Jeremy Hill is the team’s consensus number two. The 6’1, 238 pound LSU Tiger is big and slow, but he will grind out yards and add a nice one-two punch to compliment Giovani’s quick running style. Character issues dogged him through college, and kept his draft value lower than it should have been, but the Bengals have likely found a runner who can immediately step in and even lead the team if Giovani goes down.

The fight for the Bengals’ third running back is one of camp’s biggest competitions, and veteran BenJarvus Green-Ellis might be the odd man out. Although still the nickname-champ of the NFL, Law Firm has a couple disadvantages: he is the NFL’s version of an old man at 29, is due $2.5 million if he makes the team, and is being chased by younger and much cheaper runners. Luckily, he has lots of experience and is a popular player, but former Cornhusker Rex Burkhead and returning Bengal Cedric Peerman are fighting to take his place.

So far in training camp, both Bernard and Hill have impressed, Hill especially for his pass catching and blocking. Green-Ellis has had vocal support on the field from both coaches and players, but Burkhead and Peerman appear to be getting more and more reps over the veteran. Law Firm’s time in Cincinnati may be coming to an end. 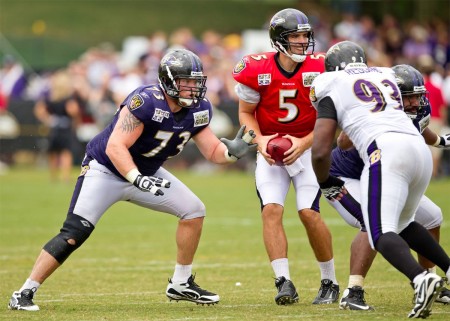 Baltimore Ravens – The Raven’s running “attack” was worthy of little more than quotation marks in 2013 as it ended up dead last in the entire league. Behind a makeshift offensive line, Ray Rice was only able to scratch out 3.1 yards per carry and his backup, Bernard Pierce, had even worse numbers. As an optimist might say, things can only get better, and new Offensive Coordinator Gary Kubiak will try to revive a once potent ground game.

Looking at the 2014 offensive line and the Raven’s four main running backs – Ray Rice, Bernard Pierce, Justin Forsett, and rookie Lorenzo Taliaferro – a pessimist might say the Ravens are not out of the woods just yet. First, the offensive line is being rebuilt with free agents and players back from injury, and whether or how fast they can gel is a concern. Second, Ray Rice’s two-game suspension puts Pierce front and center to start the season, and the team will have to depend on either journeyman Forcett or the team’s fourth-round pick Taliaferro to productively back him up. Luckily for Rice and the team, all issues aside, two games in a 16 game season is far from crippling.

Forcett has the potential to be a valuable addition. He is going into his sixth NFL season and has been a reliable, and sometimes very effective, running back for several teams. He has also played for the Texans and Gary Kubiak, so he should be familiar with the coach’s system and philosophy.

Taliaferro might also have a prominent role in the running game. The 2013 Big South Conference Male Athlete of the Year is big at 6’0 and 226 pounds and was drafted in the fourth round to make an impact in his first season. With Rice out two games, both Taliaferro and Forcett will be needed to start the season. After that, it is up in the air who will be third and fourth on the depth chart.

Early training camp feedback for Taliaferro is positive, and both Rice and Pierce look to be in top shape, a vast improvement from last year when both were having weight problems. One troubling note is that Pierce walked off the field early over the weekend with the team doctor. He has had rotator cuff surgery in the offseason, but Pierce sent out a message on social media saying he is fine and nothing is wrong.

Incidentally, if there is going to be any fallout around the NFL from Ray Rice’s actions, and the very light punishment handed out by Commissioner Roger Goodell, one would not know it listening to the crowd at the first day of Ravens training camp. Held at M&T Bank Stadium, the people in attendance stood and cheered as Rice’s face was shown repeatedly on the scoreboard.

It is unlikely he will be received as well at other stadiums around the league. 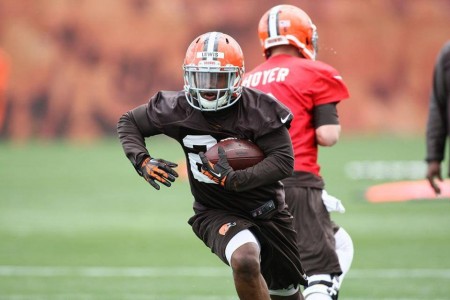 Cleveland Browns – The Browns come into training camp with no true number one running back. That much became clear when preseason depth chart predictions put oft-injured career backup Ben Tate at number one and Terrance West, Chris Ogbonnaya, Dion Lewis, Edwin Baker, and Isaiah Crowell in a big clump behind him. Still, things likely cannot get much wilder than last year, when the team dumped Trent Richardson and went with Ogbonnaya, Baker, Willis McGahee and Fozzy Whittaker. The fact that the squad ended up ranked 23rd in the NFL is somewhat of a miracle.

Tate has shown plenty of talent since being drafted in the second round by the Houston Texans in 2010, but injuries have made a mess of his career. He missed his entire rookie season with a broken ankle, had success backing up Arian Foster in his second year, was limited in his third by hamstring and foot injuries, and had five different injuries last year, landing him on IR to finish the season. He now comes to a perpetually shaky Browns squad and will be expected to carry the ball around 20 times a game if he can keep his starting role.

Tate’s main competition is Terrance West. The third round draft pick out of Towson ran for 2,590 yards and 41 touchdowns last year and comes into camp at almost exactly the same size as Tate. Tate obviously has several years’ experience over West, but it would not be that surprising to see the former Golden Knight take Tate’s place as first on the depth chart.

After that, things get crowded. Dion Lewis was talented enough to be a backup last year but tore his ACL. Edwin Baker contributed a bit in 2013 but lacks size. Isaiah Crowell is a talented undrafted rookie but had enough off-the-field issues to get him kicked out of the University of Georgia. And Chris Ogbonnaya is reportedly being turned into a fullback. All in all, a group that is somewhat talented, mostly untested, and with no clear-cut third and forth backs to move up if Tate or West get injured.

So far, Terrance West is having a noticeably better training camp than Tate, but Tate and Dion Lewis did turn heads when they helped start a large fight between the offensive and defensive squads. Whether this helps or hurts the two running backs is unclear.