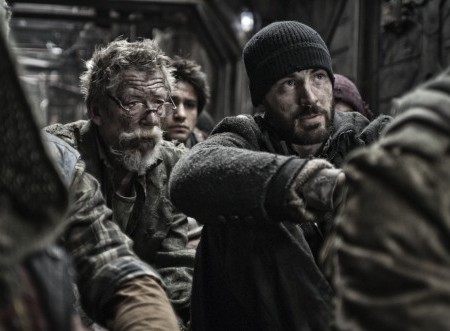 Snowpiercer, the South Korean directed science fiction thriller based on a French graphic novel and starring Chris Evans, was shot in 2012. It was released in 2013 in South Korea and was then shown in just about every country in the world but the U.S. because of the film’s producer Harvey Weinstein.

It seems that the producer wanted the director of The Host and Memories of Murder, Joon-ho Bong to make science fiction thriller and then got cold feet about the final product. After demanding that Bong make major cuts to the film, which the director refused to do, Weinstein opted for a limited 2014 theatrical release of the film.

It is not known if Harvey felt that the American public would not “get it” or whether he really had no faith in a director who delivered a film that got rave reviews everywhere else. Perhaps Weinstein himself did not “get it.”

This science fiction film about a train with survivors of a frozen apocalyptic world, caused by scientists who are trying to counteract global warming, is based upon a very popular French graphic novel titled Le Transperceneige.

The South Korean directed Snowpiercer stars Chris Evans, aka Captain America, Tilda Swinton, Ed Harris, Jamie Bell, John Hurt and two South Korean stars that Bong has worked with before. The two actors in the science fiction thriller, Song Kang-ho and Go Ah-sung, have both worked with the director before. Song Kang-ho starred in Memories of Murder, the film that got Joon-ho Bong noticed, and Go Ah-sung, as well as Song, both starred in The Host as father and daughter, just as they do in Snowpiercer.

The film is playing in select theatres in the U.S. as part of the “limited” release offered by Weinstein. Although, due to the rave reviews that film has received thus far, Harvey has agreed to open the film in more theatres. Whether this will result in more cinematic views is not known, the film can be streamed however via iTunes and Amazon while it is being screened in theatres.

It is interesting to note that Song Kang-ho and Ko Ah-sung are not mentioned by Chris Evans in the “Extras” portion of the iTune download. Evans goes on to extol the virtues of working with Jamie Bell and Tilda Swinton, Ed Harris and Octavia Spencer but no mention is made of the two Korean actors.

Another note of interest, is the fact that another South Korean actor, Choi Min-sik has a part in the Luc Besson film Lucy, premiering on July 25, and besides working with Song Kang-ho before, the two are also good friends and making their “Hollywood” debuts in the same year.

The film’s story begins in 2014 when the world learns that it can no longer ignore global warming. Scientists introduce a chemical to counteract the man-made problem and it causes the world to freeze solid.

A megalomaniacal Ed Harris, who plays Wilford the man responsible for the train, stays in the front of the vehicle as a tyrant and master of the several different classes of survivors who live in different sections of the train.

Chris Evans’ bearded character, Curtis lives in the tail-end of the fast moving train along with Jamie Bell, as Edgar, and John Hurt, as Gilliam. These are the lowest members of the societal breakdown within the moving, and limited, civilization.

Curtis and Gilliam lead a revolution intended to take over the train. In order to do that, they need to “rescue” Namgoong Minsoo, played by Song Kang-ho, a drug addict who was the security specialist on the train who can open all the doors/gates to the different cars. Minsoo then wakes up his daughter Yona, played by Ah-sung Ko, who is also an addict.

The group fight their way through the train against other higher levels of citizenry, and “Mason” played by Tilda Swinton. The apocalyptic and dionysian society on wheels is disturbing, fascinating and compelling. By the end of the film casualties are high, secrets are learned and this complex, action fueled film is a splendid “Hollywood” debut for Joon-ho Bong.

This science fiction thriller from the South Korean director is a great film which does not fall into a particular pigeon-hole, which may be why Weinstein wanted so desperately to change it. Snowpiercer lets Chris Evans step away from his Captain America shield and uniform and remind his fans that he can really act. If finding a theatre for this feature is difficult, streaming is available on iTunes and Amazon as well a 2013 Blu-ray version of the film.