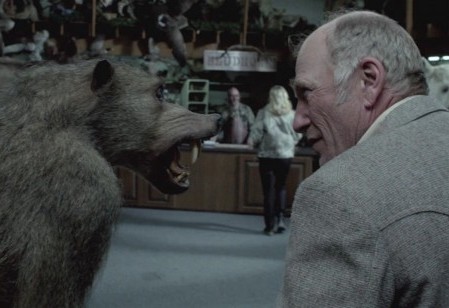 The Bridge: Ghost of a Flea begins with a mostly naked woman who is washing blood off her tattooed body who is aided by the teen boy who found her in last week’s episode; later in the show Ruiz cranks things up and Cross admits to having sex with the brother of her sister’s killer. Lt. Wade and the DEA strike up an alliance and Frye, along with Adriana, discover just how deadly the cartel money really is.

Cross and Wade go through the red hybrid car with the dead man and “stuffed” dog. Cross states that she discovers that a woman was also in the car and Wade questions her about her time with Dobbs’ brother after noticing a “lovemark” on her neck. Sonia then asks her boss if they would be having this discussion if she were a man and he backs off. The two then go to a taxidermist to ask about the dog and they discover something far more sinister in the basement of the business.

The taxidermist reveals that a man and a woman approached him to “stuff” something else, a man’s body. Meanwhile Ruiz “comes to” next to the woman he met in last week’s episode and tells her to wake up as he must go to work. While buying coffee and a pastry, he notices a man watching him from across the street, a man who wants to be seen.

When the detective arrives at the station three policemen who were at last week’s raid, where an unidentified colleague attempted to kill Ruiz, are looking at him and laughing. Two of the men move off and Ruiz comes up and attacks the remaining cop. Once he has beaten him into submission, the detective offers the man his loaded gun and tells him to try shooting him now.

In The Bridge: Ghost of a Flea not only is Ruiz cranking things up, but Daniel Frye and Adriana are getting closer to discovering the truth behind all that money and the dead woman who was meant to be watching it. Their investigations take them deeper into the world of the cartel and the fear behind all those involved with it.

The DEA come in and identify the stuffed dog, who turns out to have been called Yankee. The animal was partnered with the dead man, who was a DEA agent, found in the taxidermist’s basement. After some initial DEA “chest thumping,” Wade convinces the two men to share the case. The governmental agency taking on the DEA agent’s murder and the El Paso police taking on the dead cartel member in the car.

Fausto turns out to be the man controlling the Juarez police and proves it by arranging for Ruiz to return to El Paso to partner once again with Cross. Considering the issues that Marco has been facing south of the border with his colleagues, it is a wise move. Sonia is drawing away from Wade, her father figure, boss and protector mainly because of her dalliance with Jack Dobbs.

Frye and Adriana go to a cross-dressing karaoke bar and while questioning Raul Quintana, Daniel gets punched in the nose. Later Raul talks to the two about his dead aunt and gives them information which leads them to a disturbing discovery.

Sonia discovers border security footage of the mysterious woman passenger from the red car who turns out to be Eleanor Nacht, the same woman that Fausto is looking for. Cross requisitions the security footage without tell the DEA and Wade gets angry with her again.

The Bridge: Ghost of a Flea continues to mesmerise and while Ruiz, aka Demian Bichir, cranks things up, the regular cast keep turning in the highest calibre of performances. Guest star Franka Potente as Eleanor Nacht (Run Lola, Run, Creep) is suitably creepy as the cold assassin and it is a pleasure to see her again. By the end of the episode Marco is back in El Paso, the DEA reveal that they want Fausto in their hands and Frye and Adriana make a gruesome discovery. It also turns out that one person who will not be making a repeat performance in The Bridge is the poor sexually frustrated teenager Kyle.