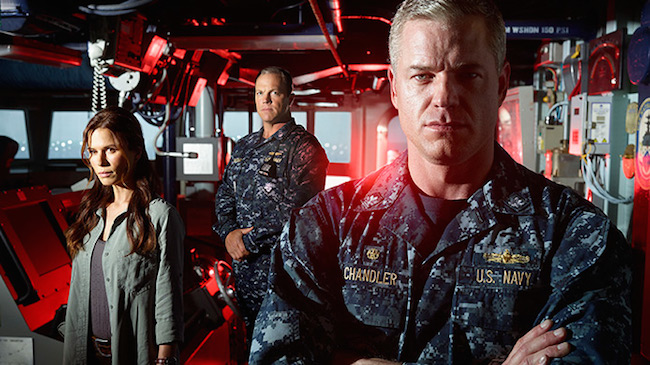 On the third episode of TNT’s The Last Ship: Dead Reckoning, the drama is heightened when the Nathan James is at a standoff with a Russian ship that has nuclear warheads on board in the Guantanamo Bay. Previously Dr. Tophet had been in contact with the Russians because his family was captured and being held hostage unless he communicated via satellite phone with the Russian naval ship. The Russians are of course after Dr. Scott and the primordial strain of the deadly virus that has infected almost 80 percent of the world.

Commander Chandler speaks with the Russian Commander and asks that they meet in person to discuss the terms. Chandler is familiar with the Russian naval commander and even has a book written by the man about modern naval tactics. While the two are meeting, the Russians are laying down a string of mines in the water in order to keep the Americans from being able to escape. The Russian commander believes that the world is theirs for the taking, because all semblance of a political government has been eliminated, and now they are each The Last Ship’s of their own navy. The Russian commander speaks intensely about the virus being an invisible fire that ran through humanity, and that the fear was worse than the virus itself.

The Russian also claims that he has something necessary for making the cure that the Americans do not have, but will not say what exactly. Dr. Scott is adamant that he is bluffing. Commander Chandler will not give up either Dr. Scott of the primordial strain, so there is a bit of a stalemate going on because the Russian’s cannot take the ship by force. They would risk losing the strain and Dr. Scott, who may be the only researcher left alive with the necessary skills to create the cure.

Next on the third episode of TNT’s The Last Ship: Dead Reckoning, the crew of the Nathan James begins to draw up tactical plans to look for another way out of Guantanamo Bay. They find a small canal and when a two-man crew is scouting it out, they get ambushed and killed by the Russians. Lt. Danny Green is extremely upset because yet again he has lost men under his command. In retaliation Commander Chandler uses the five-inch guns to blast the water near the small patrolling Russian boat, which ensues a dramatic standoff with the Americans threatening to kill the three Russians in the water if they do not move out of the bay. At the very last second the Russian commander caves in, afraid to look bad by letting his men die needlessly.

This gives the Nathan James some time to plan an exit strategy. When Dr. Tophet fears the Americans are completely unwilling to negotiate, he captures Dr. Scott by gunpoint and tries to smuggle her off The Last Ship. Someone spots them, and shots are fired while Dr. Scott runs back into what appears to be the ship’s mess hall. There Dr. Tophet threatens to unleash the virus on the group of people gathered unless he gets his way. Dr. Scott calls his bluff, telling him he is not a killer. She is able to talk him into handing over the virus, and then Tophet is arrested and questioned. They find out he was planning on using a small boat to travel at night to the Russians.

This information is vital to the American’s plan to escape. They use Lt. Danny Green and Lt. Kara Foster, who have a romantic relationship, to impersonate Tophet and Scott. They will instead drive a bomb into the Russian ship while the American ship escapes under cover of darkness through the tight canal at high tide. Commander Chandler decides to take a very risky move. He sends the ship through the canal without sonar or radar. In order for the Russians to not be aware of their movement, the Nathan James has to use a 10 foot long piece of tin foil as a distraction. Even if it is scientifically sound, the concept of a 10-foot long piece of aluminum foil replicating the radar blip of a massive naval destroyer is comically absurd, yet MacGyveresque in its clever simplicity.

The timing of Green and Fosters’ approach to the Russian ship, coupled with the manual navigation of the American ship, leads to a very time sensitive dramatic sequence of events, where everything works perfectly with only seconds to spare. After Green and Foster get back aboard the ship Green lets out his emotional frustration by telling Foster he loves her so she needs to stay away in order not to let emotions compromise their mission. The third episode, Dead Reckoning, of TNT’s The Last Ship ends with the Russians finding out their hull has been breached by the explosion, that the Americans have gotten away, and a strange scene in which their scientist, who was thought to be dead, breathes calculatedly on a lab mouse, possibly alluding to his immunity.

8 Responses to "‘The Last Ship’ On TNT Episode 3: Dead Reckoning – Recap and Review"