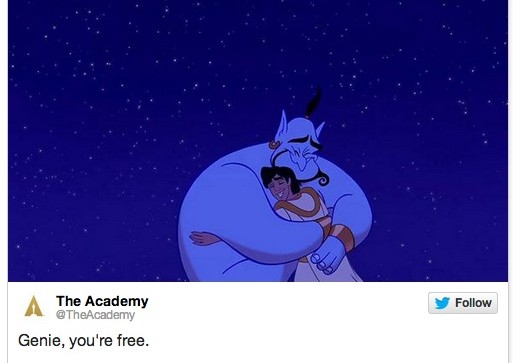 Like everyone else on the planet, I was deeply shaken by the news that prolific actor and comedian Robin Williams had committed suicide.  I was grateful to see more than a few statements about how wonderful the man was, but even more so when I saw that people were now talking – really talking – about suicide and depression with far more openness than I had seen for a good long while.  Like many, I was deeply moved by the tweet from the Academy of Motion Picture Arts and Sciences where Aladdin and the Genie – perhaps one of Williams’ best known roles – embrace and Aladdin says to the Genie that he’s free.  There have been some, such as the American Foundation for Suicide Prevention (AFSP), who have suggested that the tweet actually sends the subliminal message that suicide is a viable option when dealing with mental health problems.  This could not be further from what is likely the truth.

The AFSP’s Chief Medical Officer Christine Moulier says the tweet could be seen as presenting suicide in “too celebratory a light.”  Anyone who has ever dealt with suicide or suicidal thoughts would likely say that there is nothing to be celebrated by committing suicide.  It is an act of desperation, one where the person contemplating it is looking for any way to end the pain they feel.

I never knew Robin Williams, but I have dealt with people who have contemplated suicide, and I do know what it is like to experience depression.  Depression can be a very misunderstood term, as many people connect it with simply feeling sad.  It goes far beyond that; in my case, I physically ached for two or three days to the point where I did not want to get out of bed.  I am on low dose medication to deal with depression, and I take a B complex regularly to help me deal with depression’s equally ugly twin sister anxiety.  When you are dealing with depression, you feel terribly isolated, even in a crowd.  There may be a sense of not being good enough, smart enough, or whatever enough to be in the same room with certain people.

According to a recent opinion piece by former late night television host Dick Cavett, who knew Robin Williams, the comedian likely knew that feeling all too well.  Cavett recounts an evening where Williams had brought the house down at a comedy club, and then said to Cavett when he went backstage, “Isn’t it funny how I can bring great happiness to all these people,” he said, “But not to myself.”

Depression can make sufferers feel trapped within themselves.  People expect certain people to behave in certain ways, and depression sucks that desire to behave in expected ways out of those who feel depression.  I do not know if Robin Williams felt this, but I am certain he felt trapped by the depths of whatever depression he was going through at the time of his death.  I also know when the depression finally lifts, you feel as though you have been given a new lease in many respects, and you do not ever want to feel so low again.

Robin Williams was an incredibly prolific person who was as giving on screen as he was off.  It is becoming clearer over time that the man was deeply troubled by a number of demons over the years, and depression and addiction were the two biggest.  In tweeting what was a heartbreakingly sweet image, the Academy was honoring Williams, not glorifying his suicide or trying to present it as a viable solution to dealing with depression.  Suicide is a permanent solution to a temporary problem, and it is undeniably tragic, particularly for his three children Zak, Zelda and Cody.  It is agonizing to see someone you love feel such deep pain to the extent that they would contemplate taking their own life.  The Academy was showing the world that they understood that although Williams paid the ultimate price, he was finally free of the depression that chained him for so long.