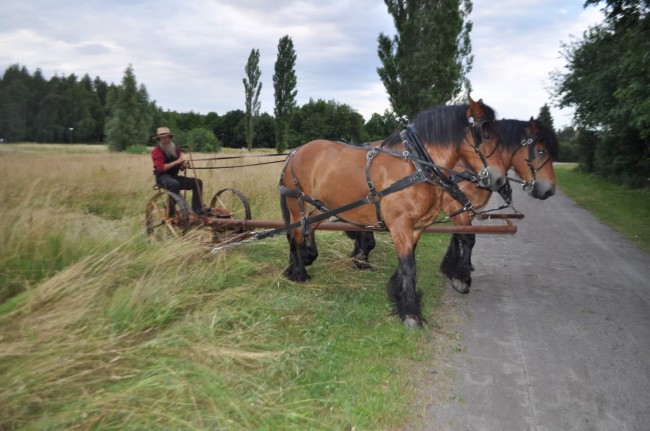 Steven Howells, 39, and Nicole Vaisey, 25, of Hermon, New York were charged with first-degree kidnapping after abducting two Amish girls from their family’s roadside vegetable stand. Their farm was in a rural area near Oswegatchie, close to the Canadian border, where many Amish practice their different ways.

When the girls, Fannie aged 12 and Delila, aged 7, went out to wait on a customer, as other family members milked cows in the barn nearby, witnesses saw the driver put something in the back seat and drive away. A massive search began in the community of around 4,000 with helicopters and state police joining the search. The investigation was hampered, however because the Amish could produce no photographs of the girls. Their father had to run to the neighbors to ask them to call 911. With no telephones in the homes, investigators were surprised at how quickly news spread.

Neighboring people showed their support, holding their candlelight vigils, even as the Amish held their own. In the devastating ice storm of 1998, the Amish had used their horse-drawn buggies to deliver water and kerosene to their “English” neighbors. Amish speak a German dialect known as Pennsylvania Dutch. They are not Dutch; the word comes from Deutsch or German.

Over 24 hours later, the girls were found about 30 miles from home, walking barefoot and cold in the rain. They came to the doorstep of Jeff and Pam Stinson, who recognized them as the girls missing from the Amish farm and called the police.

The District Attorney, Mary Rain, spoke with the girls and confirmed they were sexually assaulted. She said she was “100 percent” sure there will be more charges. Computer hard drives were being taken from the home of Howells and Vaisey. Sheriff Kevin Wells said the pair was “looking for opportunities to victimize.” This will be Rain’s first criminal case involving the Amish, with their different ways.

Amish comes from Jakob Amman, in the Anabaptist church, who advocated following Christ and forsaking the world. Amman was born in Switzerland, then moved to France and joined the Swiss Brethren, later known as Mennonites. The Brethren, Lutheran, Mennonite, Moravian, and Reformed churches were all part of Pennsylvania Dutch. Most denominations consider “forsaking the world” to mean not patterning thoughts, desires or ways after the world’s system of thinking or goals in contrast to the Biblical views. The Amish takes it more literally. Most groups forbid owning cars, having electricity, owning radios, TV’s and computers. It is not that they consider technology itself as evil, but they do not want to introduce foreign values. For instance, they might have a telephone at their shop at work, but not at home, so that it does not interfere with family life.

In 1700, William Penn invited the persecuted to come to Pennsylvania for religious freedom, and today there are no Amish in Europe. There are many Amish groups in Ohio, Pennsylvania and Indiana as well as 27 others states and Canada. Amish is actually one of the fastest-growing groups in America. In 1920, there were around 5,000 Amish in America, while today it is over 300,000. The number has more than tripled since 1984. Large families are acknowledged as a blessing from God.

Amish clings to simplicity as a way of life. The men grow beards and wear broad-brimmed hats while the women wear long dresses and bonnets. Buttons, Velcro or zippers are not allowed. Women never wear jewelry or makeup. Some wear bright colors, but no plaids, prints, stripes, etc. are permitted. The Amish believe in humility and would never want to feel proud of worldly things or even their accomplishments.

Many Amish farms, but they are also carpenters and artisans, with some members even working at “English” owned workshops or factories. They pay taxes, but not Social Security, since they believe the church should care for each other’s needs. Because of this, they have no insurance. They are also exempt from military service, because they believe in non-resistance. They follow Matthew 5:39 and will move away rather than fight.

In 1972, the Supreme Court ruled states may not force the Amish to attend public schools. The Amish usually attend school through the eighth grade, normally at private schools, but about 10 percent attend public schools. Teaching is done in English as well as in their German dialect. The children are all bilingual, speaking their German dialect at home and English at school.

Children usually have no homework since they have chores when they get home, as well as chores in the morning before they leave. Families always eat together and are committed to helping each other. They call each other by their first names, even teachers, since they believe all are equal in Christ.

Rumspringa or “running around” begins at age 16. On weekends, the young people socialize with their friends. During this time, they usually decide who they want to marry and whether they want to be baptized and join the church. This is a time for young people to decide how their life will be, like the “English” or like their Amish families. Usually they elect to join the church and abide by their ordnung, the way Amish do everything.

The preliminary court appearance for Howells and Vaisey will be this week. The Amish, who call themselves the Heavelton Settlement, have new evidence showing why they are different and why they prefer being separate from the world. They want to pass through this world without becoming part of it.