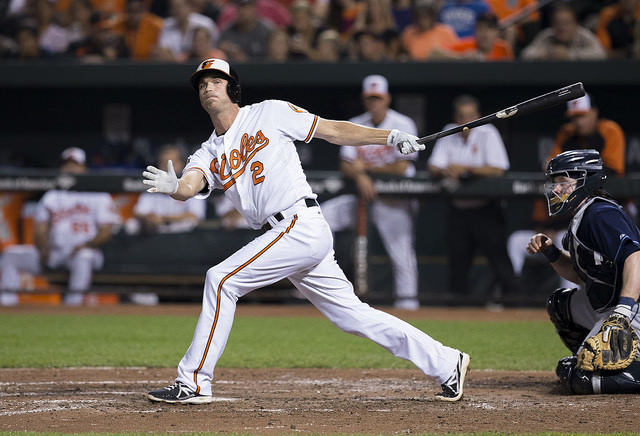 The Baltimore Orioles appear to be heading to the playoffs with an AL East crown under their belts for the first time in over 15 years. Homeruns, timely hitting, and good all-around pitching – these are the three main components of the O’s game that have helped Baltimore own the second largest division-leading margin in baseball. On the other hand, as seen over the course of the season, if the O’s fail to go yard, they fail to score much at all. If there is one component of their game that could truly define their success – or lack thereof- in the long run, it could be their inability to play “small ball”.

According to SportingCharts.com, the simple definition of “small ball” is the offensive strategy of moving runners a team has on base into scoring position in a deliberate and methodical way. It is true that the AL does not implore the use of “small ball” as much as the NL due to the designated hitter. However, even when it comes to AL rankings, under the “small ball” categories of Stolen Bases (SB), Strikeout/Walks ratio (K/BB), On-Base Percentage (OBP), Productive Outs Made (POM) and Sacrifice Hits (SH= Bunts + Hits), the Orioles still rank in the very bottom of the American League.

Among the ALs top seven playoff contending teams (LAA, SEA, OAK, DET, KCR, NYY and BAL), in the categories of SB, K/BB and POM, the Orioles rank dead last. In the only other two categories (OBP and SH), the O’s rank second-to last.

This lack of “small ball” production has reared its ugly head in the team’s most recent losses and even in their most recent wins. For example, in Monday’s 9-1 shellacking of the Tampa Bay Rays, Baltimore hammered out five homeruns out for a total of eight RBIs. The only other run was scored off of an error. In Tuesday night’s 4-2 victory, the Orioles racked up nine hits, eight of which were comprised of singles. Given this rare high-OBP, there was still only one surprising glimpse of “small ball” execution out of Baltimore.

In the fourth inning, after the O’s were able to get two runners on with nobody out, Hardy followed with a productive pop out to right field, advancing Nelson Cruz to third base. After advancing the runner to third, Delmon Young stole second base as Chris Davis struck out looking. This “small ball” execution caused Baltimore to have two runners in scoring position rather than simply one. That is when catcher Caleb Joseph came in and ripped a single to center, registering his only two RBIs of the game, giving the O’s a 2-1 lead.

However, Baltimore also displayed their lack of ability to manufacture runs through productive outs on the rare night their OBP was through the roof. After Baltimore had led off the seventh inning with a walk to Pearce, a single by Jones, and then a double by Cruz, men were on second and third with nobody out. The O’s, failing to make one single productive out, followed with three consecutive ground outs, resulting in just one scored run and a hold and save situation moving into the final two innings.

Regardless, a win is a win, so there really is not much sense in harping on mistakes when the outcome inevitably falls under the win column. However, what happens when it doesn’t?

In their three-game series with the Chicago Cubs, which resulted in a three-game sweep, and in their only loss to the Rays, certain aspects of failed – but mostly non-existent- “small ball” were made especially clear. For example, in three of their four losses, the team scored just a single run, all three of which were on solo homeruns. The Orioles also averaged eight SO, 1.66 BB and just 2.66 Hits per game. This means nobody was working the count, seeing pitches, and surely not getting on base. In those losses, no late walks – a killer for bullpens late in games – ended up scoring in the series and no stolen bases were even attempted.

As shown in their first game with the Rays, it is not for the O’s lack of talent or opportunities why they do not seem to even try and utilize “small ball” strategies. In the third and final game, while hoping to avoid a sweep, in one of their only chances to make anything happen, the O’s refused to make a move, opting to sit back and wait for the “big shot.” In the seventh inning, the Orioles went down just 2-1 after Steve Pearce blasted a leadoff homerun. After that, Cruz had reached on a rare walk with one out, giving the O’s their best and realistically only shot of the game to even the score with a dominating Wadda finally out of the game. However, no pinch runner came in for Cruz. Again, no stolen bases were attempted and no sacrifices were made. Instead, the inning finished predictably with a pop out and strikeout.

Time and time again, the O’s have proven that manufacturing runs is just simply not in their game plan. However, when it comes to winning close games in the playoffs, relying on the homerun every time could get worrisome. The Baltimore Orioles just improved to 12-28 when not hitting a single homerun in a game, but that overall record still rings to the tune of “Go big or go home.” So, when it comes to the postseason now, it looks like Baltimore fans will have to hope for one thing from these “Birds” when it comes to playoff games…Go big.