Neonatal Jaundice Does Not Cause Brain Damage If Treated Efficiently

By Nilofar Neemuchwala on August 29, 20143 Comments 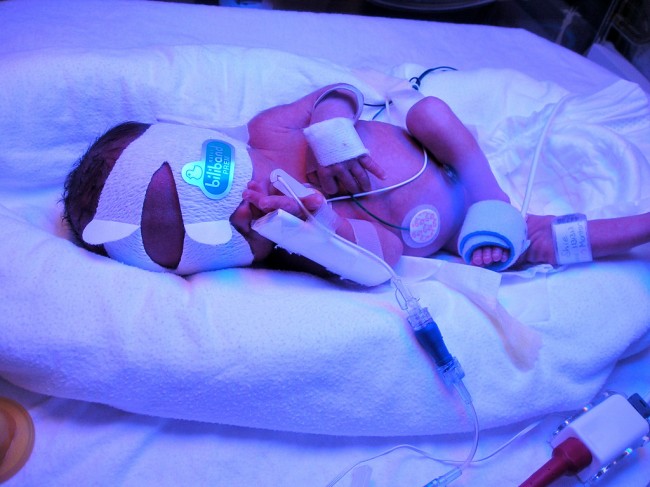 It is common for newborn babies to show signs of neonatal jaundice at birth, but the condition is seldom associated with severe outcomes such as brain damage if it is treated efficiently. The condition is the result of a yellow substance, bilirubin, which breaks down in the liver and is usually removed from the body via stools. While the fetus grows in the womb, it is fed by the mother’s placenta, which is also responsible for removing this bilirubin.

Bilirubin is created when the body replenishes the old red blood cells. After birth, the newborn’s liver must independently start casting this substance out, a process which can take some time to develop adequately. While there is a high level of bilirubin in the baby’s blood, it causes the skin and whites of the baby’s eyes to appear yellow. This is what is commonly referred to as jaundice.

Sometimes, the discoloration caused by jaundice sets out on the face and then proceeds downwards to the infant’s chest, abdomen region, legs, and then to the soles of their feet. Nearly all newborns show some signs of neonatal jaundice. This physiological jaundice becomes most noticeable two to four days after birth. The symptoms however diminish within a few weeks.

Breastfeeding jaundice is another type of neonatal jaundice commonly seen in the first week of life among breastfed babies. It occurs when the baby does not nurse well, or the mother’s milk supply is low. This condition may also appear in some healthily breastfed babies after a week. The symptoms crest in the second and third week, however low levels of jaundice can take a month or more to completely disappear.

Doctors, nurses, or a midwife will lookout for any signs of neonatal jaundice at the hospital at about 24 hours of age. If there are any signs which appear after the newborn goes home, the bilirubin levels should be measured right away. Besides a simple blood test, hospitals today use probes that estimate the bilirubin level by merely touching the baby’s skin.

A baby with neonatal jaundice must be kept well-hydrated, either with breast milk or formula food. A regular feeding schedule encourages bowel movements which will help remove bilirubin through the stool. Some newborns diagnosed with jaundice may need to be treated in the hospital for one to two days.

It is a rare occurrence that a baby has severe neonatal jaundice. This may occur if there is a phenomenal advancement in the number of red blood cells the body needs to replace. This is a chronic symptom in small-for-gestational-age babies, and sometimes in twins. It may also occur if there is a mismatch in the blood type between the mother and the baby.

Very high levels of bilirubin can be toxic to the brain and can lead to complications associated with neonatal jaundice. When the bilirubin gets into the central nervous system, it can lead to a condition called kernicterus. Kernicterus may have begun to develop if the infant begins to exhibit extreme lethargy, changes in muscle tone, and a high-pitched cry. If the situation is inadequately managed, it may cause damage leading to deafness, cause cerebral palsy or even death. However, the condition can almost always be diagnosed and treated efficiently.

Elevated bilirubin levels should be treated by a qualified medical professional to safely reduce the bilirubin levels and prevent any risk of brain damage. Sometimes, the infant will be placed under special blue lights for a treatment called phototherapy. The light helps break down bilirubin in the baby’s skin. Early detection and efficient treatment are crucial and can easily prevent neonatal jaundice from causing any damage to the baby’s brain.

US National Library of Medicine