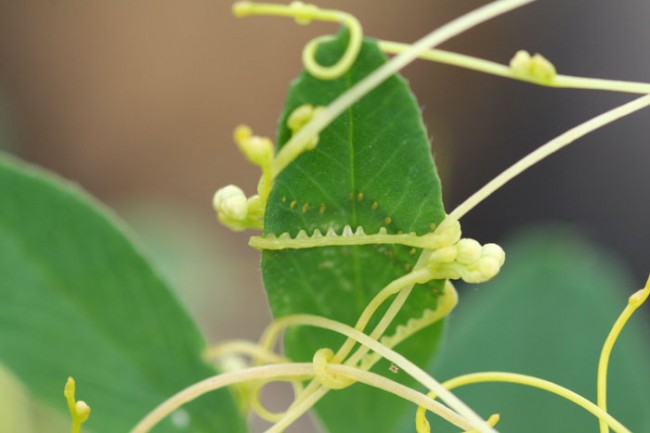 Jim Westwood, who is a professor in the Department of Plant Pathology, Physiology and Weed Science, in the College of Agriculture and Life Sciences at Virginia Tech, led the study. The study report was published in the journal Science.

In the experiment, RNA transfers were observed between a parasitic plant and two types of host plants. The parasitic plant was called dodder (Cuscuta pentagona) and the two host plants that were tested were Arabidopsis and a tomato plant. Dodder, as a parasite plant sucks nutrients and moisture out of the host plant. The dodder has an appendage, called a haustorium, which penetrates the host plant. Westwood showed that when the haustorium penetrates the host plant, RNA is transferred bidirectionally between the two plants. The transfer of RNA provided the other plant with genetic information that it did not previously have.

DNA, the genetic material that makes up chromosomes, exists in the nucleus of cells as long as the cell lives. RNA, sometimes called “the other genetic material,” is short-lived and is only produced as the product of transcription of the information in the DNA. The idea that RNA could be transferred from the cell of one plant to another seemed implausible, previously, because RNA is too fragile. It is very significant that the researchers discovered RNA could traverse across species and remain functional.

The study demonstrated that RNA moves in high numbers and crosses bidirectionally. The RNA that was found in the host plant after a transfer represented thousands of different genes. The authors described the transfer as a genomic-scale exchange.

Practical applications have been suggested based in RNA transfer between parasite plants and a host plant. One possibility is to use RNA communication to control parasitic weeds that destroy food crops, which can have devastating effects. By altering the RNA exchanges, it may be possible to keep the parasitic plant from attacking and taking over the host plant.

Previously discovered types of plant communication are based on airborne chemicals or electrical transmission, in a similar way to how cells communicate in the nervous system. This new type of plant communication based on RNA transfer from plant to plant was a surprising discovery and adds to the fascinating idea of plants having a highly complex ability to “talk” to each other.