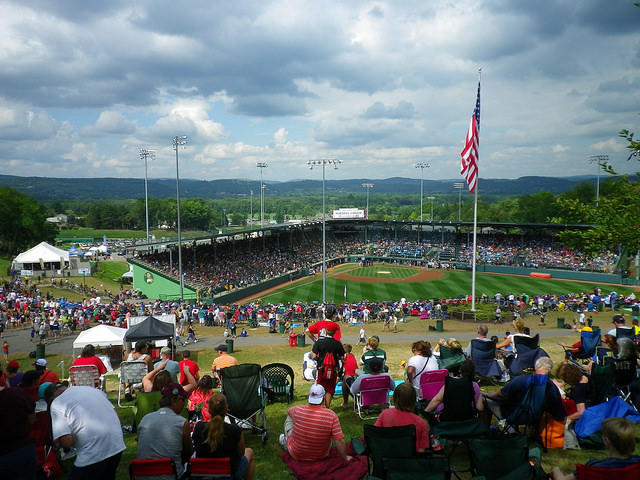 Ferguson, a small town on the outskirts of St. Louis, MO, is in mourning and on a forced curfew following the killing of an unarmed black teenager, the third of its kind in just a year and a half. In Chicago, young black boys and girls are being gunned down in record numbers with no end in sight. These stories paint a picture of a black community that is being raised in a world of fear and hate. However, on a baseball field in Williamsport, Pennsylvania, one young, black teenage girl from Philadelphia and the Little League World Series’ first all African-American team since 1992 is giving America something different to grasp on to: hope.

Mo’ne Davis, a modest 13-year-old girl with a fastball that can rival just about anyone’s- young or old- has become an overnight role model. Representing South Philly’s Taney Youth Baseball Association in this year’s Little League World Series (LLWS), Davis was attempting to become the first girl to win a game in League history. How did she hold up against the odds?

Striking out 8 batters in six innings on a 65 pitch-count limit, Mo’ne dominated en route to becoming the first girl ever to win a game at the LLWS. On becoming an overnight role model for young women everywhere, Mo’ne simply said:

“I never thought that at the age of 13 I would be a role model… I always wanted to be a basketball role model; (but) being a baseball role model is really cool.”

In the face of unprecedented odds, being only the 18th girl in a total of 9,000 players to ever play, Mo’ne Davis not only survived, but thrived at the challenge.

Another story of a team excelling in spite of adversity is an all African-American team hailing from the Southside of Chicago. In the 68-year history of the Little League World Series, no all African-American team has ever won the championship. This team is also the first all-black team to represent Chicago in the World Series since 1983 and is the first Urban Initiative team to make it since 2002. How are they beating the odds? By making history as well.

Facing Washington State’s Lynwood in their league’s first appearance in 32 years, Pierce Jones helped the Jackie Robinson West All-Stars win by a score of 12-2. Jones made history by becoming only the seventh Little Leaguer in the last 45 years to hit three homers in a single contest.

Should Mo’ne Davis’ Taney Dragons and the Jackie Robinson West All-Stars meet in a LLWS head-on collision, the game would surely end up becoming a media spectacle for the ages. However, in lieu of what is covered in the media when it comes to the black community, this spectacle would appear to be surely welcomed.

This time around, the field of battle the media will be covering will not be in the streets of a ghetto, fought by innocent youth, fighting for survival the only way they have ever known or have come now to understand. No, this time it will be fought in front of 15,000 supportive fans under the bright lights of a baseball diamond filled with dreams and aspirations. This battle, fought not with bullets anchored by hatred, fueled by racial tension, slanders and slurs, will be fought through teamwork, harnessed by a dream of becoming more than a statistic, supplemented and encouraged through cheers of support.

This head on collision, regardless of the final score, will inevitably have no losers. Only winners. As both of these teams have found a way to survive on a mantra that not many people could have, given their particular circumstances, these kids are just simply here to play ball.

Hope. It is one defining quality that everyone in their lives should grasp on to. Hope for a better life. Hope that kids- black, white, brown or whatever color- can still be kids and simply just play ball. This hope is playing out on that field in Williamsport, PA, and when it is all said and done, every man, woman and child can look back on the history that has been made here at the LLWS and smile. Smile at the fact that they can recognize the misconception that every statistic made by a young African-American these days has to be a sad one; at the fact that these children hold so much hope for a future that is so undetermined and unpredictable; and that against all odds, they are finding the inner strength that they have always possessed but that has been suppressed and are now funneling it in a positive way… And that is truly something everyone can cheer about.