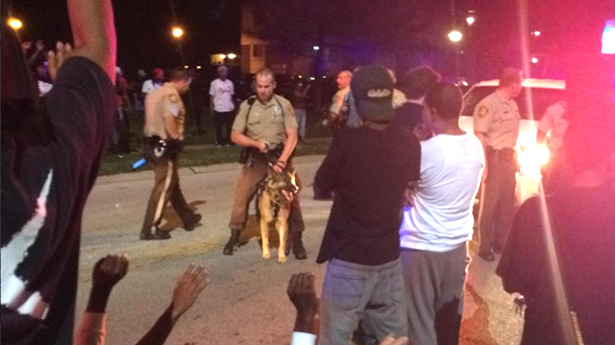 The situation in Ferguson, Missouri still continues to escalate as Wednesday night rioters fired at police officers under the guise of protesting. The demonstrations began Saturday after the death of Michael Brown at the hands of an unnamed police officer. The city’s rage is the result of eyewitness accounts stating that Brown, who was unarmed, had his hands up in the air when the officer shot him several times.

Now, instead of peaceful demonstrations, ever since the shooting Ferguson has been rocked by vandalism, looting and general unrest. The police put in place to protect the peace have experienced rocks and bottles thrown at them. Wednesday night they even went so far as to throw Molotov cocktails at the officers. As a result, police used tear gas and rubber bullets in an attempt to subdue the crowd. However, no end to the turbulence seems forthcoming.

Police brutality, though, is only partly to blame for the turmoil that continues to disrupt the peace. According to the San Diego Free Press, residents consider the shooting to be “just another example of the racism they face everyday [sic].”

Although exact details of the tragic event have yet to be released, the main witness in the case, Dorian Johnson, who was with Brown during the time of the incident, has identified the officer involved as being Caucasian. It is this key piece of information that has devolved this heartbreaking event from a problem related to excessive police force to potentially being one of racism as well.

The police now find themselves under fire, both literally and figuratively, from Missouri protesters because of the allegations of racism on the part of the still unknown Caucasian officer. So heated is the tension that the mobs protesting in Ferguson have even threatened the officer’s life.

The accusations of racism have caught the attention of the famous Rev. Al Sharpton. He has promised to support Brown’s family during this time of crisis. Benjamin Crump, the same attorney that handled the case for Treyvon Martin, has also entered the fray.

Many citizens, as well as the media, have expressed concern that there are a majority of Caucasian officers within the police force in Ferguson. However, Police Chief Thomas Jackson has already expressed that racial profiling in their hiring process is forbidden. Jackson has also made known that their department has had difficulty recruiting and maintaining African American officers. These statements have done little to assuage public distrust of the Ferguson police department though.

Despite the numerous allegations of racism, there is no evidence that race had anything to do with the actions of the officer in question. While Johnson professes Brown’s absolute innocence in the events that took place, the police department has recently made public information that states that the officer involved did, in fact, sustain injuries from the altercation.

The lack of objective evidence, however, has still not stopped the Missouri protesters from placing the police under fire with their accusations that the Ferguson police department, in general, and the policeman who shot and killed Brown, in particular, are racist. Whatever the truth of the matter really is, when getting caught up in the commotion it is easy to forget that this is a country that claims that all are innocent until proven guilty. With continued pleas from both the President and Brown’s family for a peaceable assembly, the nation waits anxiously for further developments in the case.