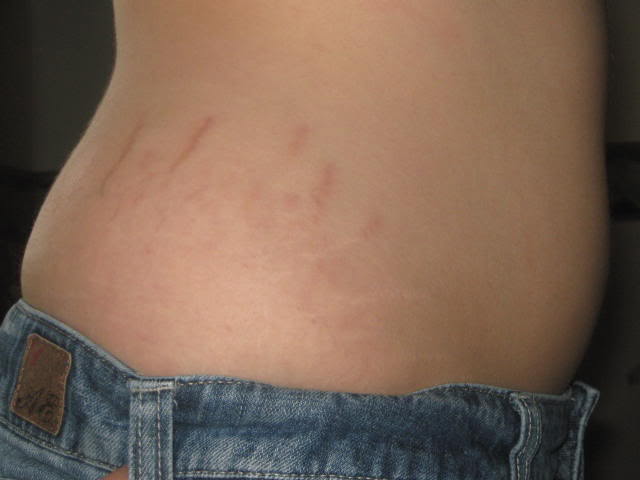 Stretch marks are recently under fire for being too visible in public. In fact, reports are starting to surface about women, recently pregnant mothers to be exact, being bullied for exposing what is a very natural, not to mention unavoidable, byproduct of creating another human life. In a recent instance of such bullying, a woman was at the beach, in a bathing suit; a perfectly acceptable place to bare some skin even if there are a few visible stretch marks. In a world where everyone is just trying to find comfort in their skin, it seems the height of naïve judgment and just plain mean to condemn a woman for displaying her body after the hard work and miraculous feat of growing and birthing a child. A little education might go a long way in seeing bullies like these gain some much-needed perspective. All things considered; stretch marks seem a small price to pay for growing a whole human, though this information hardly seems to matter when being publicly shamed. It is the bullies who should be ashamed of themselves.

In fact, stretch marks are most common among people who have accomplished all sorts of life-affirming achievements. Body builders, weight-loss success stories and mothers are just a few of the more common categories within this group. Though unsightly, stretch marks, especially in instances like new moms or newly healthy men or women, are of a badge of honor, a scar from doing battle, and not something to be embarrassed about or ashamed of. While the people who have them will be the first to say how much they would rather not, it is certainly not the place of anyone else to judge them for it. According to Medicine Net, stretch marks appear when the elastic middle layer of the skin has been stretched. Severely stretched skin can lead to the collapse of binding tissue, irritated swelling, and then scars begin to appear as the injured skin begins to heal. There is nothing written that there is a sure-fire way to avoid them, and some might take care to notice the distinct mention of the word “injury.” Stretch marks are a common injury and the body’s way of healing. Some might liken the marks to the callouses of a guitar player or the missing toe-nails of a prima ballerina; nobody is mocking them.

Scars come with intrigue and the sort of awe-struck looks that plead for a cool story. Stretch marks, not so much. Surgery from a broken leg, cool scar story, attacked by a dog, cool scar story, made an idiotic mistake in the shop… again cool scar story. However, those hitting a goal weight or giving birth get to boast no such cool scar stories. Stretch marks are, in the grand scheme of things, a small price to pay for a strong and healthy body. It seems some critics just will not be convinced, and truthfully, those suffering from the annoying marks do not seem to think so either.

The abdomen, near the breasts, and on the side of the butt are some of the more common locations for stretch marks to appear. Exclusivity, however, is not a common by-product of this type of scarring. Arms, thighs, and even backs often fall victim as well. Not to mention 80 percent of the American population. It seems rather odd then that anyone would ridicule a woman for her body’s natural progression, when chances are those doing said ridiculing most likely have some themselves or at least have something about their bodies they do not necessarily love. Not to mention the old adages of “if you do not have anything nice to say,” and “nobody is perfect.”

People with stretch marks should not be embarrassed and should not coverup in shame. They should be proud of their amazing bodies and what they are capable of, but this is not that easy and rarely the case. Thus, there are measures to take that can alleviate the appearance of stretch marks, though not get rid of them entirely, and make baring skin a bit less traumatic. Moisturizing and staying hydrated, are the only two methods recommended time and again, as well as monitoring a quick or slow weight gain, outside of medical intervention. Hopefully, until a sure-fix or way to avoid stretched skin all together is introduced, people might want to be mindful. Those stretch marks are the emblem of a true warrior and a small price to pay for the reward in their life that was, no doubt, worth a few tiny scars.

One Response to "Stretch Marks: A Small Price to Pay"