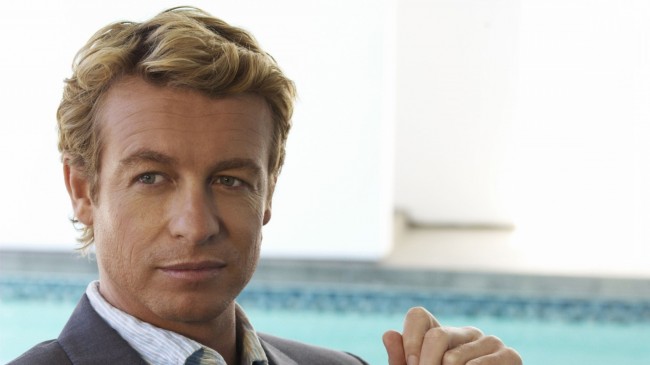 Simon Baker, best known for his role as Patrick Jane in the hit CBS crime drama The Mentalist, is one of the latest CBS stars to participate in the highly coveted ALS Ice Bucket Challenge. The 45-year-old took to Instagram to share his completion of the event.

For his take on the challenge, Baker was seated on a brick wall in front of a row of hedges, at an undisclosed location. Prior to giving the green light for the ice-cold water to be dumped upon him, the Australian born actor gave his thanks to his nominator, friend Eric Zucker. He then went on to reveal his own nominations, in which he chose daughter Stella Baker and co-star Robin Tunney. He also enlisted The Mentalist crew member Matt Gossen, who works on the set of the show. It remains to be seen whether or not these individuals will at some point accept the nomination and go through with the challenge themselves. Tunney, who plays the actor’s on-screen love interest Teresa Lisbon on the show took to Twitter shortly after Baker’s challenge to congratulation him and express her amusement at the video. Once the water hit him, the actor could not seem to find anymore words due to the shock of the temperature, and the video ends with Baker having a look of extreme shock on his face.

Almost three dozen other CBS network stars have also completed the challenge over the past few weeks. These include The Big Bang Theory‘s Jim Parsons, Kaley Cuoco-Sweeting, and Mayim Bialik. Parsons appeared in a solo Ice Bucket Challenge, as well as assisting Bialik with hers (which was performed fully clothed in the shower of her home). Cuoco-Sweeting completed hers poolside, with the aid of her husband Ryan Sweeting.

Several stars of fellow CBS crime drama Criminal Minds have also donated to the cause; Joe Mantegna, Matthew Gray Gubler, and new series regular Jennifer Love Hewitt have also voluntarily been soaked for charity. Mantegna and Gubler’s challenges were slightly less conventional, which each of them putting their own spin on the task. Mantegna put a humorous twist on his version, getting a look-alike to take his place before the water actually hit him, and pretended he thought the camera had been stopped in order for viewers to not realize the switch. Gubler’s video began with him fully advocating for the cause, but stating he would give a check rather than go through with the experience. Before he could finish this statement, however, an unknown person jumped into view and dumped the ice-cold water on him before he could do anything to stop them. The Las Vegas native then pretended to reprimand the culprit, saying in mock anguish that his suit was made of suede and therefore could not get wet. Will Arnett, Julie Chen (with the help of Will Arnett) Kat Dennings, and the entire cast of Reckless are just a few of the other CBS stars on the list of those who have completed the ALS Ice Bucket Challenge.

It remains to be seen if any other CBS stars will follow in Simon Baker’s footsteps and complete the ALS Bucket Challenge. Most of the network’s stars, it seems, have already risen to the challenge.