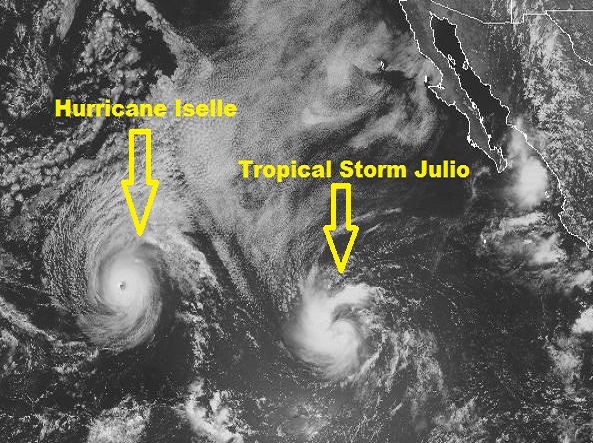 Tropical cyclones  Iselle and Julio pose a double threat for the islands of Hawaii. Hurricane Iselle was scheduled to touch base on Hawaii’s Big Island on Thursday, with Hurricane Julio following suit as soon as Sunday. Hurricane Julio thus far has been reported to be less threatening, but will still cause damage in the wake of Hurricane Iselle. Honolulu’s Central Pacific Hurricane Center (CPHC) issued a hurricane warning Wednesday afternoon for the Hawaii County.

Tropical storm warnings have taken effect in the islands of Lanai, Maui, Molokai and Oahu. On the island of Hilo people were on the beaches anxiously watching the water. Amidst the panic of the locals, the surfers were showing great excitement with the anticipation of monster waves. Tropical cyclones hitting Hawaii are rare and they are usually shielded by the mountains on the Big Islands. Surfers were rejoicing, but native islanders fear that the surrounding mountains, which usually act as shields, will be no match for the two coming storms.

Customers poured into local grocery stores this week stocking up on the essentials. Bottled water, canned goods, toilet paper and rice were the most popular items, along with first aid kits and flashlights. The Costco in Honolulu very quickly become sold out of bottled water, leaving the customers to bottle water on their own.

Iselle and Julio have prompted numerous school closures on the Big Island and Maui, including the University of Hawaii, Hawaii Community College and the West Hawaii Education Center. All were expected to remain shut down all day Thursday and Friday in anticipation of the storms’ arrivals.

According to the National Weather Service Hurricane Iselle made landfall this morning with strong winds and heavy rain weakening to a tropical storm as it moved over the Big Island. Nevertheless, flash-flood and hurricane warnings have gone into effect, warning islanders to evacuate or, at the very least, secure loose objects.

Hawaii Governor Neil Abercrombie issued an emergency proclamation so he could have access to the state’s disaster funds in preparation for the looming damage the double threat tropical cyclones Iselle and Julio posed for Hawaii. According to Hawaiian Airlines, those who planned to travel on Thursday and Friday to get away from Iselle and Julio will have their fees waived

Late Tuesday Hurricane Julio developed from a tropical storm into a hurricane. Hui reported the tropical cyclone more than 1600 miles from the island Hilo, traveling towards the Big Island at 17 mph. Late Wednesday, it had accelerated to 18 mph and was located within 515 miles of Hilo. By the time it touched base with the island, it was forecast that Julio would  be reduced back to a tropical storm status.

Tropical storms, hurricanes and cyclones are not common with Hawaii. The last time the Hawaiian Islands were hit by a hurricane was 1992, when Hurricane Iniki battered Kauai Island and killed six people. In 2002 the U.S. Geological Survey said that hurricanes actually making contact with the Hawaiian Islands “are relatively rare in the modern record.” For the first time in 22 years, Hawaii is on high alert and preparing the best they can before the arrival of the double threat of Tropical Cyclones Iselle and Julio.

One Response to "Tropical Cyclones: A Double Threat for Hawaii"