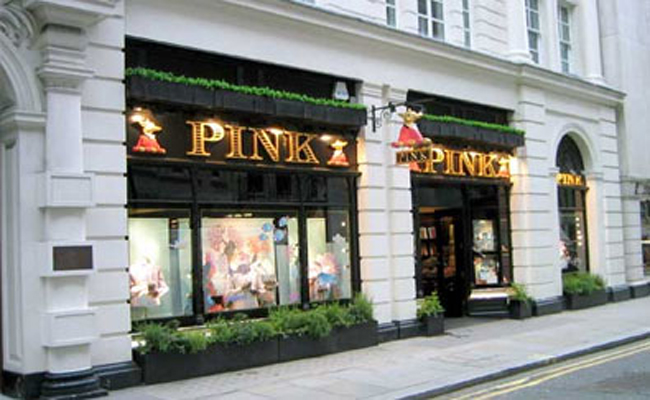 On July 31, the U.K. High Court of Justice, Chancery Division, handed down a ruling in the trademark infringement case Victoria’s Secret U.K. vs Thomas Pink, Ltd. in favor of the London-based menswear retailer. The 217 page ruling by Justice Colin Birss found the VICTORIA’S SECRET PINK brand of “college-girl” clothing and lingerie to have infringed on Thomas Pink, Ltd.’s trademark PINK. Thomas Pink, Ltd.’s mascot, the Cheeky Fox, refers to the iconic red English fox-hunting jacket, called a Pink, which is thought to have been designed by a tailor named Mr. Pink in 18th century.

The London menswear retailer, known for its luxury men’s shirts, contended in its complaint that Victoria’s Secret U.K.’s use of PINK to brand some of its shops and clothing has led to confusion among consumers. The brand name VICTORIA’S SECRET is often not prominent when the word PINK is used both on clothing and on storefront signage, they argued. Given Victoria’s Secret’s plans to expand its European operations, future use of PINK by the U.S. company in Europe will dilute Thomas Pink, Ltd.’s trademark.

In its defense, L Brands, Inc. lawyers contended that PINK as used by the claimant was merely descriptive and had not achieved a level of distinctiveness required for trademark infringement. Thomas Pink, Ltd. had never used its trademark in exactly the same form in which it was registered, they argued. In addition, the U.S. company held that Thomas Pink, Ltd.’s trademark was narrowly confined to its brand of men’s luxury shirts, and that the Victoria’s Secret PINK brand of women’s clothing and Thomas Pink, Ltd. men’s shirts have coexisted in the U.S. for decades without issue.

The U.K. High Court examined four different uses of PINK by Victoria’s Secret and found two of them, that marked on clothes and that on storefront signage, had infringed on Thomas Pink, Ltd.’s trademark. The other two, in-store signage and social media ads, did not. Justice Birss found that the first two cases would likely result in confusion for clients. He noted, “consumers are likely to enter one of [Thomas Pink, Ltd.’s] shops looking for lingerie and be surprised and disappointed when they find they have made a mistake.”

As regards the distinctiveness of the Thomas Pink, Ltd. trademark, the court found the mark not to be merely descriptive, despite the differences from its registered form. Justice Birss agreed with the claimant that the market position of Thomas Pink, Ltd. in Europe is different from that of the U.S. The average European consumer is much more likely to confuse the mark PINK between brands, since it is strongly associated with Thomas Pink, Ltd. in Europe. The High Court held this to be the case even if the well-known mark VICTORIA’S SECRET is present.

Intellectual property legal analysts who are watching the case closely say this is probably not the end of the dispute. An appeal by L Brands, Inc. is likely. It is also possible that a coexistence agreement will emerge that will allow Victoria’s Secret to continue to market its VICTORIA’S SECRET PINK brand in Europe, provided some changes are made to the mark’s current use that are in line with the High Court’s findings.