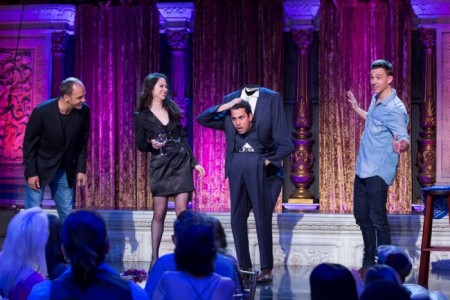 The world premiere of Wizard Wars, which is either reality TV with a difference, or the game show that really is magic, was aired on SyFy on Tuesday August, 19. Before going too far into this first episode, it should be mentioned that two of the producers, who are Las Vegas headliners, and residents at the Rio, Penn and Teller are very busy at the moment.

At least on television, they are. Their United Kingdom show, Penn & Teller: Fool Us, which was actually produced and aired back in 2011 in the U.K. was picked up by the C.W. network and is playing at the same time as this new SyFy series.

While the show is being produced by the Las Vegas residential act and world famous magicians Penn Jillette and his stage partner Teller, the actual show is the brainchild of Rick Lax. The original concept first appeared on Justin Flom’s YouTube channel of the same name. Justin is one of the wizards in the premiere episode.

Flom hosted the video and it was filmed in Rick’s apartment. Apparently the idea was suggested by Justin and Lax then helped to make the idea a reality. Each contestant in the original version had to use items picked up at a Dollar Store and two teams of magicians competed using these random objects.

It should be pointed out that Kyle Marlett who is in the YouTube version was also on the premiere episode of Wizard Wars as a contestant. While Kyle is not a creator of this reality TV game show with a difference, he does have a brand of comically presented magic that is very entertaining. Enough so that he was the only contestant from the YouTube video to make it to the first episode.

The idea for this competition show came after Lax, and Flom, watched the SyFy series Face Off – which precedes Wizard Wars on the network – and he got excited about the possibilities that this type of show could bring to magic.

The format of the show has changed after its move from Justin’s YouTube channel. Flom is no longer the host. He is one of four “in-house” wizards who must compete against the winning team of contestants. Ellen Fox has taken over the hosting duties from Justin in this SyFy show.

The wizards are, apart from Justin, Gregory Wilson, Angela Funovits and David Shimshi aka, Shimshi. Wilson is a “deceptionist'” Funovits is a “mentalist” and Shimshi is an “illusionist and mentalist.”

None of the resident wizards judge the acts presented by the teams. The judges are Penn & Teller, Jason Latimer who is an illusionist and magic critic Christen Gerhart.

In the first episode, the two teams consisted of Kyle Marlett and Dalton Wayne who were team one and team two was made up of Canadian duo Chris Funk and Ekatarina (formerly from Russia). Each team had to make use of the same three items as a major portion of their magic act.

Both team one and team two had a large element of humor in their presentation and Funk made the most of being the “ditzy” member of his act. The Canadians actually impressed the judges with a new trick that none of the four had seen before.

After declaring a winning team, the rules changed as well as the objects to be used in the act. This time, the winners competed against two of the wizards. As in the first competitive bout, humor was a staple of both the “in-residence” team and the winning team.

The premiere of Wizard Wars was very entertaining and as a reality TV game show with a difference proved to be fascinating as well. The contestants and the cast of the show are all attractive, witty, and intelligent. Fans of magic acts will enjoy the tricks and the humor in the program. Ellen Fox stresses at the beginning of the episode that no cameras are used to perform any of the magical gags. The show is good enough it appears that SyFy has pulled another winner out of its hat.