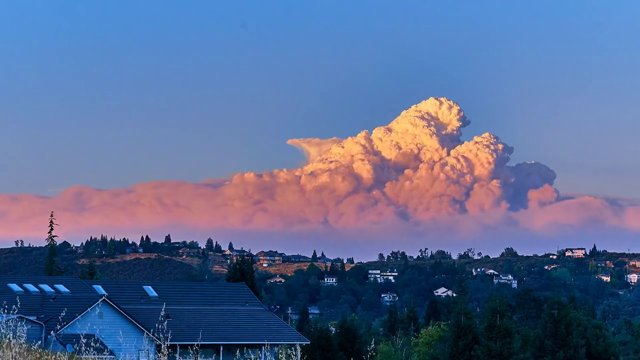 The alleged arsonist charged in California with purposefully starting the King wildfire in the northern part of the state pleaded ‘not guilty’ in court on Friday. The fire has proven explosive and has caused the evacuation of approximately 2,800 residents from the area as of Thursday.

The suspect, Wayne Allan Huntsman, was taken into custody in Placerville late on Wednesday and has been booked into the county jail in El Dorado. The alleged arsonist, 37, is being held on bail of $10 million.

District Attorney Vern Pierson would not comment on why investigators were led to Huntsman nor why Huntsman would have lit the fire. He said that detectives had spoken with Huntsman before he was arrested and that the investigation is ongoing.

Tami Criswell, the sister of Huntsman, told The Associated Press that she does not believe her brother, who has been employed in private security and construction, lit the fire and that if he had, it was an accident. According to Criswell, they grew up in Santa Cruz and spent a lot of time camping, adding that Huntsman loves the forest and made a point to be very careful with campfires. “He’s a really good guy,” she added, and would never intentionally cause harm to another person.

Huntsman’s police record tells a different story. At the time of his arrest, he was wanted in Santa Cruz on a $5,000 warrant for obstruction or restricting a public officer on Feb. 27, 2013. According to officials, he has skipped a number of scheduled court appearances. He has also been convicted in Santa Cruz for vari0us crimes since 1996, including auto theft, grand theft, tampering with a vehicle, assault with a deadly weapon and driving under the influence. He spent three years in San Quentin State Prison on the assault conviction. In addition, he was found guilty in 2003 in Plumas County for receiving stolen property.

Of the 12,000 homes in danger from the fire, many are located in Pollock Pines, which is located east of Sacramento by 60 miles. Although no damages have been confirmed to date, unofficial reports are that four homes have been destroyed. Displaced residents currently occupying an evacuation center are understandably anxious.

According to the California Department of Forestry and Fire Protection, the fire, which is being fueled by wind, grass and heavy woods, has burned 76,376 acres and is 10 percent contained. Since it began on Saturday, it has cost $5 million per day to fight. It has proven especially difficult to contain due to the very dry conditions which have resulted from the third year of drought in a row in California. Approximately 4,425 people are tasked with fighting the blaze. Captain Michelle Eidam with the Sacramento Fire Department describes the fire as “volatile.”

Overnight on Thursday, the fire expanded over 3,000 more acres. The explosive nature of the fire had caused a record-breaking amount of fire retardant to be used in the fight against it. Over 203,000 gallons of the substance was dropped in just one day.

Residents of Weed, California, have not been as fortunate, according to damage estimates released on Thursday by city officials. Among the fire’s casualties are 143 residences and nine other buildings. Evacuated residents will be allowed to return to the area as soon as utilities have been restored. The Weed fire was 85 percent contained and had burned 480 acres on Thursday. Investigators are still working to determine the cause.