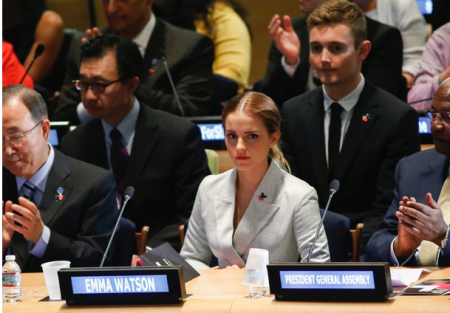 Emma Watson has definitely left Hermione Granger back with Harry Potter and Hogwarts, her rousing speech to the UN about her feminism also mentioned that men need equality too, not just women. The 24 year-old actress spoke to the United Nations at the HeforShe campaign at the New York UN Headquarters giving an in depth and passionate speech about what it means to be female not just in England but anywhere in the world.

The university graduate spoke of being called bossy when she was a child of eight because she wanted to direct the plays put on in front of her parents. Emma then went on to chronicle certain ages in her life where gender played a significant role in her everyday existence. Being sexualized at age 14 and seeing her female friends dropping out of their favorite sport activities at age 15 for fear of becoming too muscular.

The Bling Ring actress spoke of the bad reputation and connotation that the word feminist had earned. The implication being that anyone who practiced feminism was unattractive looking and acting as well as being a man hater. Watson related that she was a feminist as she believed that women deserved equal pay, the right to have the final say over their own bodies and the right to have women speaking on their behalf in places of power.

The Perks of Being a Wallflower star went on to explain that being for feminism did not mean that she was anti male. Emma Watson and her impassioned speech to the UN about gender equality included men too. Not just in her “formal” invitation to males across the globe to join women in pushing for equal rights across the board, but also to point out that men, at least in the United Kingdom, do not have it any better than their female counterparts.

Watson referred to the 1997 Hillary Clinton Beijing speech on women’s rights and pointed out that “sadly” nothing has really changed since then. No one country, according to the actress, can boast that they have real equality between genders. She also pointed out how the current state of affairs diminished her own father’s importance as a man in raising Emma.

She explained how society did not place the same significance on the man’s role in parenting. Watson also went on to say that men were under a lot of pressure. So much so that the rate of suicide in the U.K. was highest in the age group of between 20 and 40. The actress concluded that she had seen men become insecure and fragile by a preset and distorted sense of what makes a man successful. According to Watson, men do not have gender equality either.

Emma Watson spoke of people wondering just what right this “Harry Potter girl” had to speak on gender equality, which included her feelings that men needed help too, and just why she was qualified to give a speech to the UN. The Noah actress admitted that she had asked herself the exact same question. Watson then said that she felt it was her duty to do something, Emma quoted the statesman Edmund Burke who said that evil only needed good men and women to do nothing for it to flourish. The actress’s speech was well received by all and can be seen in the video below.