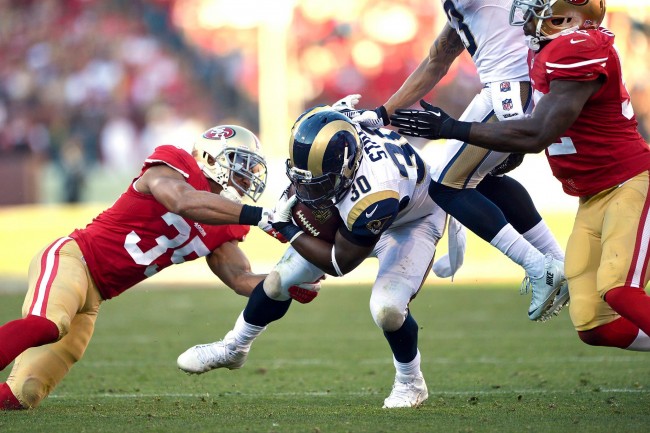 It is a familiar feeling to fantasy football players: an early drafted “can’t-miss” or a historically dependable point scorer flops in week 1, and suddenly a top lineup looks a lot weaker than it did before Monday. Caution is always advised; a single week is rarely enough time to judge a players’ worth. But sometimes a dog is a dog and before the start of week 2 it may be time to hit the panic button and do whatever it takes to trade, drop or humbly bury a player on the bench. Time to come up with Plan B.

Sometimes the engine is rusted, the tires bald and the brakes shot, but a fantasy football player buys the car anyways. For example, Cleveland Browns running back Ben Tate. Tate has missed 24 games since starting with the Texans in 2010 and has had almost every known football injury known to man, yet Cleveland gave Tate over six million dollars and almost half of all fantasy players gave him a spot on their starting lineup. Hopefully everyone has a backup plan. Tate left in the second quarter with a knee injury and was very effectively replaced by Terrance West and undrafted rookie Isaiah Cromwell. West is a definite fantasy pickup while Tate may never provide any decent value for his owners.

81 percent of all owners in CBS Sports Fantasy leagues started the Buccaneers’ Doug Martin, meaning he was drafted early and counted on to anchor lots of lineups. The question is, why? Depending on a runner to regain his previous form after a year full of injuries is risky business, and even riskier considering Muscle Hampster’s short resume. Martin had a total of 16 yards against the Panthers before leaving with a leg injury, and there are rumors he was healthy enough for more plays in the second half but was held back by the team. His backup, Bobby Rainey, was not much better with only 20 total yards and a fumble, but the third-year player is talented and will take away carries for the rest of the year. Factor in the Bucs weak offensive line, and Doug Martin looks like a bench or flex player, at best.

Last Sunday saw the Vikings hammer the St. Louis Rams 34-6, and with the game goes Zac Stacy’s value. Sam Bradford is gone and none of his backups can play the role of Kurt Warner. There is no miracle 1999 season in this team. Going into week 2 the Rams are ranked last in ESPN’s football power rankings and the 90 percent of owners that played Stacy last week should already be panicking. The passing game is short of talent, the offensive line looked lost against the Vikings’ pressure, and there is no reason to think opponents will do anything but stack the line for the rest of the season. Stacy looks talented enough to have some good weeks but nothing to be counted on. Keep an eye out for him next year, though.

A lot of fantasy football players are in love with Victor Cruz, but maybe they should just be friends. He is still a viable starter, the number one option for Eli Manning with Hakeem Nicks gone to the Colts, but it is questionable whether he can be an anchor for both the franchise and a fantasy team. Week 1 was a Monday night mess for the Giants. The Lions outclassed them top to bottom and there is no better example of where the two teams are headed than Megatron’s 164 yards and two touchdowns versus Cruz’s two catches and 24 yards. Behind Cruz on the depth chart is Ruben Randle and Odell Beckham Jr. and therefore the promise that Cruz will be double teamed all year. He will have his games, but when and where and how often are in doubt. Eli Manning is starting to perfect the hangdog look; Cruz’s fantasy owners might have the same expression on their faces if they keep Victor Cruz as their number one receiving option this year.

Panicking leads to unthinking decisions, and now is the time for cool heads and quick trades. By week 2 or 3 players will have a better idea of what they have and flashy trade bait  will mean less and less. Fantasy football  can be a game of perceived value; now is the time to talk up the busts to come.