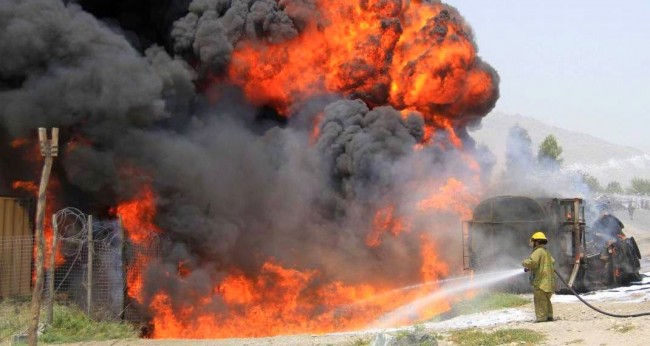 A sudden explosion at a fireworks factory has killed 12 workers in China and left another 33 seriously injured. The blast occurred on Monday around 3:00pm at the Nanyang Export Fireworks Factory in the southern province of Hunan.

Out of the 47 workers who were at the site during the explosion, only three escaped unhurt. The original injury count of 38 was revised after several workers were counted twice as emergency services rushed them to hospital.

Three workers who sustained only minor injuries have already returned home and 26 are being treated. Four others who were critically injured during the blast have been transferred to a hospital in ZhuZhou city. A rescue operation is still underway for two workers who are yet to be found.

Three of the injured were unlucky bystanders who happened to be in the vicinity at the time of the blast. The factory has since been cordoned off and the surrounding area is littered with debris and shards of glass from the shattered windows of nearby homes.

The explosion that killed the 12 workers occurred in a Chinese fireworks factory that was properly licensed, according to the local government body. The government gave no comment on the cause of the blast, other than saying it was a workplace safety incident. An investigation into the matter is currently underway.

The explosion is just the latest in a string of workplace related incidents that have plagued China’s massive workforce in recent months. An explosion at a fireworks factory in Fuzhou last year left three dead and 45 injured. Most of the injuries were allegedly sustained from the flying brick and glass. This year in February a cargo truck exploded on a highway bridge in Henan, causing nine deaths and at least 11 injuries. The incident caused an 80-meter section of the bridge to collapse, dropping the truck and 10 cars over 30 meters below onto a dry river bed.

Workplace accidents lead to the deaths of thousands of Chinese laborers every year. Government officials also admit that the total number of deaths is unknown, as major production companies routinely bribe the families of dead workers, rather than allow them to report the incidents to the authorities.

The Chinese government says it is working hard to increase the safety regulations of its labor-heavy production industry. Although China already has nationwide safety regulations in place, problems continue to occur when local governments turn a blind eye to local businesses who are letting the standards slide against the need for increased productivity. An important step for the safety of workers all across the country is to convince these government bodies that it is in their best interest to maintain the regulatory standards.

In response to a deadly factory explosion earlier this year, which killed 75 and left over 180 critically injured, the State Council Work Safety Commission has launched a campaign on the safety of handling combustible materials. The campaign aims to focus primarily on factories that handle potential ignition sources, such as aluminium, paper and tobacco. In the meantime, workplace accidents and deaths in China remain a common occurrence.

The factory explosion that killed 12 occurred in Liling City, one of China’s major fireworks production areas. China is the world’s largest producer of fireworks and many hundreds of thousands are used every year in the celebration of festivals and lunar calendar events.