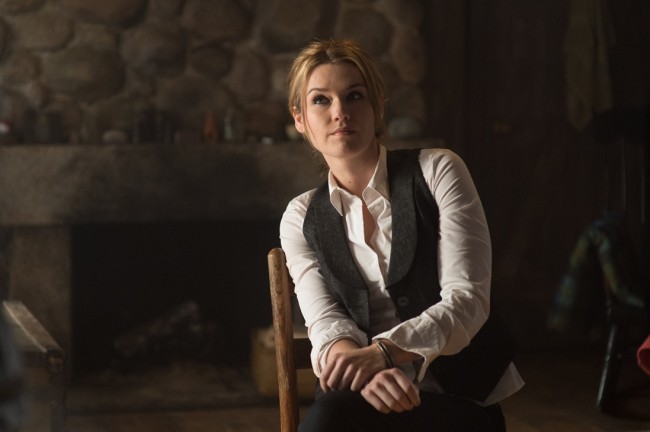 Season 5 offered the viewers of Haven quite intense first two episodes. It has been a crazy and an emotional roller coaster and the Spotlight episode calmed things down a little bit. However, Nathan is not giving up on Audrey yet and it seems like he is ready to do just about everything to get the love of his life back.

After Nathan took off with Mara in episode two, Dwight still has no idea what is going on. Duke brings some supplies for Nathan and as he is still struggling with the loss of Jennifer, he tells his friend that he should move on from Audrey, because she is gone. However, Nathan says that he has a plan and that he talked to Audrey, who is apparently still somewhere inside Mara. Duke gives him 24 hours to fix Mara and after that, he intends to notify Dwight and the guard.

After Duke leaves, Nathan and Mara are found by two guard members. The couple manages to overpower them and they continue their journey. Before they leave, Nathan tells Mara that they will travel south and he makes sure that the guards hear him too. But instead of driving south, Nathan takes Mara north, to his father’s old cabin, where not so long ago, he and Audrey spent some precious moments alone.

Since Mara has all of Audrey’s memories, she decides to use them on Nathan. She reminds him of Sarah and their moments at the beach. Mara tells him that she would not be able to come back without his help, because everything he did for Audrey, helped her. Especially killing agent Howard and destroying the barn. She says that he is nothing without Audrey and that it is sad how much he needs her. However, Nathan replies, saying that many people need Audrey and nobody needs Mara. Maybe only William, but she only needs him to help her creating the troubles. Mara gets quite upset when Nathan asks her if she is even capable of loving somebody. This was a great moment between the two of them, since it seemed like Nathan hasn’t lost his compass completely.

However, Mara manages to seduce him and after some moments of making out, Mara bites his lip and Nathan comes to his senses and steps away, since this is not something that Audrey would do. It looks like he is confused and even though he really misses Audrey, he should keep in his mind that Mara has all of her memories, which makes it quite easy for her to fool him. As Mara falls asleep, Nathan sits next to her and tells Audrey that he is sorry. In that moment, Mara wakes up, only it is not Mara, it is Audrey. She tells Nathan that he should treat Mara the way he treated Audrey, because this helps her fighting with Mara’s hold. Finally, Nathan gets an answer on how to bring Audrey back. If it seemed before like he has no plan, he now definitely has one.

Back in the city, Duke is having a really bad day. And not a bad hair day, even though he cuts his hair short and his pony tail is now gone. He heads over to the Grey Gull and just as he thinks that someone is trying to rob him, he sees his friend Jodi. She tells Duke that she needs money to get her family out of the town. Jodi gets really upset and all of a sudden, there are two beams of light, exploding from her body. She almost sets the Gull on fire and when the beams disappear, she escapes. Duke tries to help her, but when he arrives to Jodi’s house, he finds out that she killed her sister and this time, there were four beams. Duke and Dwight try to contain her trouble with the fire blankets and when it looks like they succeeded, they find out that Jodi needs light to survive.

As Dwight suggests that the guards can take Jodi some place safe, Duke tells him not to do so. He does not want his friend to die, so he decides that he will let Dwight know where to find Nathan and Mara. Duke believes that Mara is able to fix Jodi, however, the big question is if she will be willing to do that.

Back at the cabin, Mara wakes up and Nathan is making some pancakes. It looks like he really has a plan, as he keeps calling her Parker. After they eat their breakfast, Nathan takes his plan one step ahead. He starts tickling Mara and Audrey immediately manages to resurface. She tries to tell Nathan about the aether in Mara’s jacket pocket, but Mara still has most of the control. However, before Nathan makes any further progress, Duke comes into the cabin and breaks the spell.

Mara is back, Audrey is gone again and Nathan is quite angry at Duke for ruining the moment. However, his anger does not last long, because Duke starts feeling very sick and it looks like he is just about to faint. Even though he had no eye bleeding situation since they came out of the cave, Mara tells Duke that he is just about to explode, due to all of the troubles that the Crocker family absorbed over the years. However, she tells him that she can help, but in order to do that, she needs to release one of the troubles and give it to someone in Haven. But the catch is that Mara needs the list of the troubles and Duke tells her that they are all written in his father’s journal, which is buried with his brother. Nathan takes off to find the journal and Duke stays alone with Mara. She starts talking about his and Audrey’s trip to Colorado, but Duke does not allow her to confuse him. He looks very bad and in the next moment, Dwight and the guards burst into the cabin. It looks like Duke kept his promise and Nathan will now have to come up with some other plan on how to reach Audrey inside Mara’s head.

Even though there was a new trouble presented in the Haven‘s Spotlight episode, it was mostly just about the Mara-Nathan-Audrey triangle. In one moment, Nathan seems to be losing it, but in another moment, it looks like he really knows what he is doing. He is just being the old romantic Nathan, who is doing everything he can, to get his one true love back. The viewers are probably as anxious as he is and they are all looking forward to the moment when Audrey Parker returns to Haven.