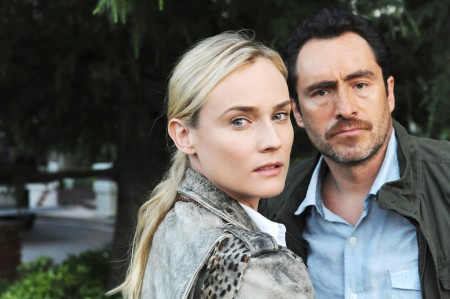 In the penultimate episode of The Bridge season two, things are coming to a head. Eleanor follows Monty to where he took his boots to be cleaned and lets him know that she does not trust the lawyer. Nacht disturbs Monty so much he threatens her with a gun. Before she leaves the killer tells him that Fausto is a demon and that he will be hard to remove. She also reminds the in-between man that she expects Sebastian to honor their agreement, the implication being that she will be back to settle accounts if he does not.

Detective Cross works out what Eleanor’s ledger means, she cracks the code and tells Hank that the book is full of addresses. Wade checks himself out of the hospital to help Sonia. Marco tries to talk Fausto into turning himself in. The drug lord accuses the cop of working for Sebastian and Ruiz says he does not but he must bring Fausto in. In response, Galvan has his right hand man kill the young marine captured with the detective.

As Sonia and Hank drive away from the hospital, she confirms that the ledger is all about “drugs and money.” The two detectives go to the first address and find that Eleanor has beat them there. Marco is put into the same stall as Sebastian’s daughter Romina. Steven goes to find Captain Robles at work. The cop is out so he tells the receptionist to pass on that Robles cannot run from his past. Linder then tells the woman when she asks who his is, that he is his past.

In The Bridge and its penultimate episode Stephen still wants revenge for what was done to Eva even though she wants to walk away and start a new life with her man. Marco asks Romina about how many men Fausto has and she does not know. The drug addicted girl gets upset and Ruiz has to calm her down.

Hank and Sonia bump into Adrianna and Frye and when the reporter gets mouthy, Wade proves that even badly wounded he is not to be messed with. Daniel tells the two detectives about the DEA and CIA battling one another with one branch trying to shut down the drug trafficking and the other supporting it.

While going over evidence the four find a map that matches Eleanor’s ledger. Sonia, Adrianna and Frye follow the map and find a U.S. customs seal. Cross leaves the two reporters at the site. Hank goes to his office and talks to the DEA agent. Wade asks the man where Nacht is and the agent says she is in custody, Hank asks the man why he does not know that Eleanor is out of jail.

When the agent gets prickly, Hank leaves and before leaving tells the agent that he should check on Eleanor and that when he does, he will help him to unscrew his head from his a**. At Fausto’s camp they are waiting for the Marines to arrive. After talking about Marco’s offer Galvan says that he is done running.

Sebastian meets with the CIA man about his daughter. Fausto calls the Marine colonel and tells him that he is leaving with Sebastian’s daughter and that he will kill her if they interfere. The colonel calls Galvan back and tells him he has safe passage. The prosecutor tells Robles that he is through and that he will be charged with rape, corruption and conspiracy. The captain does not believe him.

Frye and Adrianna find out that the drug seal is genuine. Fausto sends out a decoy vehicle which the colonel shoots repeatedly. The drug lord, his right hand man, Marco and Romina take out on foot to escape the marines. Steven goes to kill Robles and dies for his effort. Sonia and Hank split up to track a drug shipment going across the border.

In the penultimate episode of The Bridge, Eleanor is still terrifying as well as dangerous and Fausto looks like he may just escape without a scratch. Sebastian is not happy with the CIA’s lack of support and Hank along with Sonia may have bitten off more than they can chew. The Bridge has its season finale next week on FX.