The Lottery: In Extremis Season One Finale (Recap/Review) 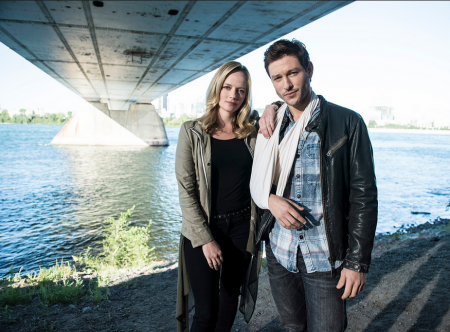 With no news of whether a second season is in the works or not for The Lottery, its season one finale, In Extremis delivered across the board with the science fiction dystopian thriller tying up a number of threads and opening the door for more Dionysian activities from the government. This show has been a fascinating look at the nefarious dealings of not just the bad guys in the White House but also outside the system. Marley Shelton and her co-stars have worked hard to bring life to this series about a world that has gone sterile with the result that the human race faces complete extinction.

The last few episodes have had Dr. Alison Lennon working alongside her friend and colleague James and with the help of Vanessa Keller, the Chief of Staff,they were tracking down the source and cause of the worldwide fertility problem. Darius Hayes, who wants control of all the impregnated fetuses, has started leaving bodies in his wake as he tries to keep the public from learning that the government caused the problem and now wants to take ownership of the world’s first babies.

Vanessa is trying to keep the president alive after learning that Darius and his cronies have plotted to kill Westwood so they can get “their man” in the White House. In the meantime, the president has learned of his wife’s intent to take Perry’s baby from her when she wins the lottery and he is not pleased. The first lady releases Ms. Sommers from their agreement but afterward distances herself from her husband saying that she can not “do this” anymore. Of course the real reason that the first lady wants out is because she has learned that the infertility crisis was her husband’s fault.

The Lottery season finale with its title of In Extremis, could mean that the last show (Forever?) may be showing just how far the rot in the government reaches with the issue of global sterility. It could also have to do with the death of the president and the control of his cabinet. Or perhaps it is alluding to the high body count in last night’s show.

Kyle and the MayTwos orchestrate and attack a small convoy that is transporting Elvis. Instead of going to plan, the mission goes badly for the small group when their intell turns out to be incorrect. The “terrorists” are shot to pieces and Kyle is shot in the shoulder before they can get the back of Elvis’ van open.

The small boy is overjoyed to be with his dad again and as the last security guard with the convoy approaches, gun raised, Elvis looks at the man who finally lowers his weapon and lets the father and son go. Kyle has, at last, got his son back. President Westwood reveals the lottery winners and despite the fact that the deal with Gabrielle is off, Perry Sommers is the first name to be called as a new mother.

James has survived being shot and is recovering in hospital, Alison visits him and they talk about what to do next. After announcing the winners, Westwood and his wife go into another room to talk about her decision to leave him and a sniper kills him. Ironically just after it looks like she has changed her mind. On top of the MayTwos getting decimated, Hayes kills the General who would not stop asking about Darius’ daughter. Turns out that blood is thicker than water to this big bad.

Sadly, it looks like In Extremis, the season one finale of The Lottery, may be its last ever episode. As mentioned by a few fans of the show, this was an intelligent thriller but one that failed to catch on with the viewing public. Whether it was a case of poor scheduling, it did after all have to compete with The Strain and The Last Ship, or was just too close to reality, with its evil government meddling, will never be known. Lifetime has not publicised if the show will be given a second season or not, until then, fans will have to wait to see if it comes back or is replaced with yet another low cost, low-brow reality TV show.