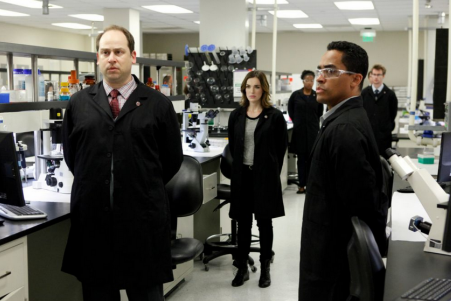 In Agents of S.H.I.E.L.D. A Hen in the Wolfhouse, Fitz and Simmons are reunited and unlike the lyrics of the old “Peaches and Herb” song, it does not feel so good, in fact it seems downright awkward and while Simmons may be all, “hey-hey” about being back, Leo does not seem able to deal with a version of his old lab partner who is not in his head. “Fitzsimmons” are not the only relationship going through problems in this week’s episode. Skye and Coulson are having a rough patch and the two have an argument/discussion just before Raina calls to make a deal with the agents of S.H.I.E.L.D.

Phil and Skye discuss the prospect of her being monitored which she is not pleased about. Skye then talks about tiny hidden cameras “in her bunk.” Phil explains that she is missing the point, both he and Garrett reacted badly to the alien DNA in the formula they were injected with. Skye did not react because she possibly already had alien DNA in her system. When the penny finally drops Skye realizes that Coulson is telling her she could be an alien. The young orphan agent reacts brilliantly and says alien (pronounced AY-LEE-IN) no less than three times and each time the exact same “cute” way.

It is nice to see that despite the show’s makers trying to force all of the cute out of Skye, new haircut, bad-a** new fighting skills, et al, the S.H.I.E.L.D. agent can be relied upon to provide an amusing reaction to the DNA question, “You mean I’m an ay-lee-in?”

Cute Skye moments aside, Agents of S.H.I.E.L.D. this week sees Raina reunited with Phil Coulson only this time she has an offer that she believes that the new director cannot refuse. When Coulson does, she sends Simmons’ picture to HYDRA to identify her as the mole in the organization. HYDRA head of security Bobbi Morse (Adrianne Palicki) had already zeroed in on Simmons although she did take off the only “friend” that Jemma had made in the enemy camp after Simmons left incriminating evidence in his drawer.

While Raina is busy panicking about the fact that Coulson would not act to save Simmons, Morse steps in to save Jemma from HYDRA agents killing her. Raina then offers to join S.H.I.E.L.D. and Phil turns her down. The new director learns about Daniel Whitehall and Skye’s father, who has the obelisk. Skye also finds out that her dad is alive and despite putting herself in danger she goes to the address Raina mentioned in her conversation with Phil.

Skye misses being reunited with her father by seconds and her chance at a family reunion and she is crushed. When she turns to Phil for support her Dad looks on angrily via a camera in the room. Coulson and his agents discover two men that Skye’s father murdered and she calls him a monster. The man drives off enraged. Bobbi and Simmons return to S.H.I.E.L.D. and Jemma goes to speak with Leo who asks, “Is that really you?” Simmons responds, “Who else would it be?”

Bobbi Morse is the newest member of the team in Agents of S.H.I.E.L.D. and it turns out that she is Hunter’s “ex” and the former mercenary is not happy at all about being reunited with her. Skye and Phil agree to reveal all and not keep secrets any longer. Once Coulson shows her the diagrams he has carved, Skye theorizes the creation is a map. Her father hand delivers the obelisk to Daniel Whitehall and asks that Phil Coulson be killed in return, along with all the other planned casualties. Phil Coulson did not get the award for best line this week. Instead Skye got the “chuckle award” for asking Hunter if his cover was “Ron Burgundy” after asking why he had been drinking. Next week’s show promises to have a trailer for the next Avengers movie and the agents of S.H.I.E.L.D. get framed.