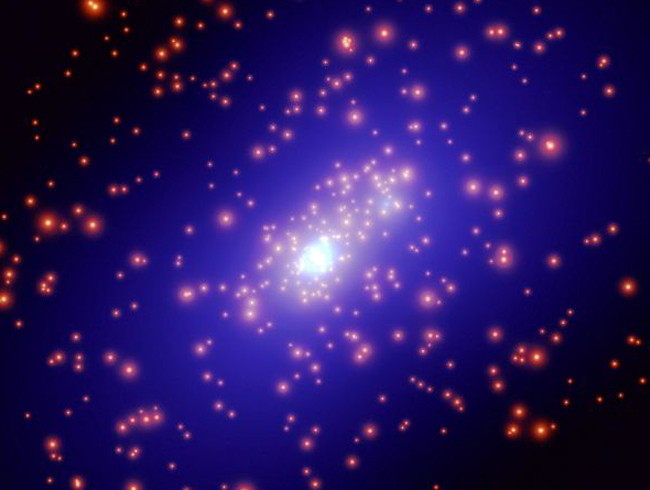 Dark matter, that invisible source producing a gravitational effect on objects in space may have been detected. It has been hypothesized to exist for more than 30 years, yet has never been found. It is theorized that 85 percent of all matter in the universe is made up of dark matter.

A team of physicists from the University of Leicester discovered a curious signal in the x-ray sky that could be caused by axions, the elusive particles of dark matter. The x-ray sky remains unchanged whenever it is viewed. Physicists, however, have found an unexplained seasonal signal in the background.

A paper on the findings will be released within a few days. Professor George Fraser, who died earlier this year, is the author of the paper detailing this important discovery. The Monthly Notices of the Royal Astronomical Society will publish the discovery in the  in Oct. 2014 publication.

The Leicester team found the data through a thorough, detailed search through the archives of the European Space Agency’s X-ray data. The XMM-Newton observatory has been in orbit for almost 15 years. Unsuccessful axion search experiments have been attempted from orbiting spacecraft and at the European Organization for Nuclear Research (CERN).

Fraser’s paper concludes that axions are produced in the sun’s core. When entering the magnetic field of the earth, these particles are converted to X-rays. Their signal is maximized when looking through the magnetic field towards the sun. The discovery of axions would be instrumental in determining how dark matter affects the makeup of the entire universe.

Fritz Zwicky was the first to theorize the existence of dark matter in 1933. His calculations of gravitational mass of a galactic cluster resulted in 400 times the value he expected from the visible mass, drawing the conclusion that most matter must be dark.

While dark matter has been theorized, it has never been seen or identified. It is, however, instrumental in universal structures of galaxies. Its presence can be assumed based on the gravitational effect it exerts on visible objects. It can further be concluded that more dark matter exists than visible matter.

In a paper issued by NASA in 2006, the agency verified the existence of dark matter using the Chandra X-ray Observatory and other telescopes. Observing the collision between two large galactic clusters, NASA found that the mass between the galaxies was much greater than all the visible mass. It was the gravitational force of invisible matter that held the clusters together. Without it, fast-moving galaxies and super-heated gases would fall apart.

The hypothetical axions are mysterious as well. Until now, none have ever been identified. Given their gravitational effect on visible objects, they are believed to have mass. While the observed axions had their origin in the super-heated core of the sun, it is not known whether there are other sources for their origin. Axions may also belong to a new, subatomic physics that is not yet fully understood.

What is clear, however, is that additional studies are required before the Leicester dark matter results can be verified. There will be more telescopes aimed at the sunward side of earth’s magnetic field in attempts to detect theses tiny axions. Verifying the existence of these particles will have a great impact in helping scientists to understand the universe.