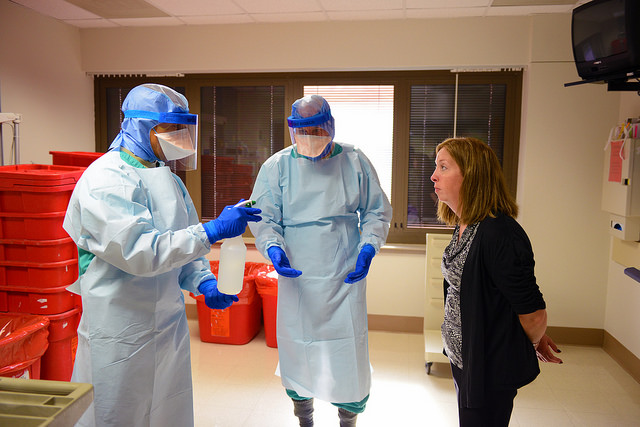 Ebola response in Oregon follows on the heels of several risk monitoring cases spurring health officials to put in place an official plan for minimizing any potential virus exposure and public health risk. Oregon Public Health’s containment strategy follows federal monitoring guidelines from the Centers for Disease Control and Prevention (CDC). The exact details of the monitoring plan and movement restrictions for each patient will depend on individual risk assessment based on factors of the exposure and the existence of symptoms.

In late October, a woman recently returned from a visit to West Africa was hospitalized at Providence Milwaukie Hospital. The CDC has since cleared the patient and officials place her in the low-risk category because she has no known exposure to the Ebola virus. That leaves five Oregon patients on monitoring plans, although state health officer and epidemiologist Dr. Katrina Hedberg assures the public that they are symptom-free. In accordance with the Ebola response plan, they are reporting temperatures twice a day for 21 days since the last possible exposure.

Just as the original patient, the remaining people being monitored are at low-risk for an actual infection. The Oregon Health Authority classifies exposed individuals in high, some in low risk categories. “High risk” patients would have a known exposure to the virus, while those at “some risk” would have contact with Ebola patients while wearing protective gear, such as medical personnel. “Low risk” individuals have traveled to an affected area but have no known exposure to the disease.

The Oregon monitoring plan places all potential Ebola patients on monitoring with increased response in relation to the severity of the risk. Low-risk patients must check in with public health officers one or more times a day to report temperatures or other symptoms. Those at higher risk levels must check in person for direct observation until their 21-day incubation period is up. “High risk” patients are restricted from public activities and travel that would expose more people to the virus. In “some risk” cases, the decision about restricted movement will be on a case-by-case basis.

Dr. Hedberg is pleased with the system’s response and the adequacy of the preparation to effect favorable results. To date, there are no confirmed cases of Ebola in Oregon and the plan aims to keep it that way. The public can call 211 with any questions about the disease. All remaining patients are cooperating with health officials to monitor for any sign of infection to avoid placing the public at risk for further infection, even though the CDC and state health officials agree that there is a low risk of contagion with asymptomatic patients. The cooperative effort between the hospitals, the county health departments, the Oregon Health Authority and the CDC sends the reassuring message to the public that the medical community is concerned for their welfare and doing all they can to enact safeguards against Ebola for patients, healthcare workers and their communities.