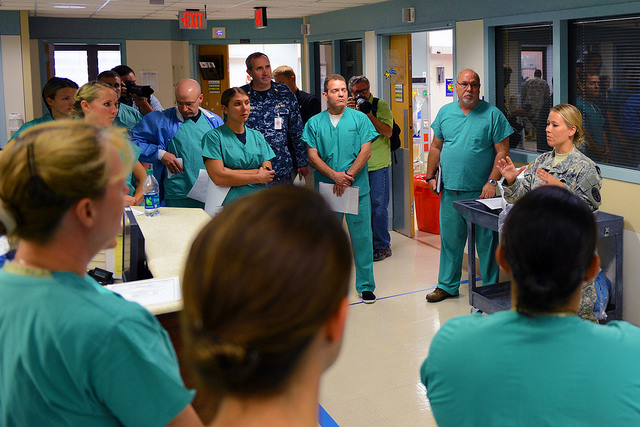 Senegal and Nigeria were recently declared Ebola-free after taking steps to contain the disease, while there appears to be some spreading confusion between the U.S government and some state governors on the correct policy the U.S should adapt to ensure that the country remains Ebola-free. So far there is no clear guideline as the matter that started as a health issue moves in to the political arena. The most recent debate concerns the decision made by Governors Chris Christie of New Jersey and Andrew Cuomo to quarantine  all travelers from the Ebola stricken region for 21 days upon their return to the U.S. They insist that the guidelines provided by the federal government are inadequate.

Kaci Hickox, a nurse who recently returned from West Africa after treating Ebola patients, was quarantined at a New Jersey airport for several days before she was allowed to go back to Maine. She was asked to continue staying in seclusion as a condition of her release. She has said she is going to defy the state on Thursday if the policy is not changed. She added that she would not be bullied by politicians by being forced to stay at home while she is not at risk to the American public. Maine governor Paul Le Page expressed concern over her decision . He said he feared for her safety and health as well as that of the entire community. President Obama voiced his opposition to the governors’ decision imposing a mandatory quarantine for those returning from Ebola-stricken countries on Wednesday. Surrounded by volunteers, he said that forceful quarantine could discourage volunteers from going to the region to offer much-needed help. He said they were doing God’s work.

Officials from the Center for Disease Control and Protection sided with the president. While they agreed that monitoring those who had travelled to the affected region was necessary, the 21-day mandatory quarantine was not the solution.
The question of whether to quarantine or not has also affected the military. The  Joint Chiefs of Staff Chairman, Martín Dempsey recommended to Defense Secretary Chuck Hagel that military personnel returning from the region where they have interacted with Ebola victims be quarantined for 21 days.

As Ebola spreads confusion on what policy should be adopted to contain its spread in the U.S., President Helen Johnson-Sirleaf of Liberia, the epicenter of the outbreak, has called upon the international community to help fight the disease. She told MSN that while she understood the reasons for fear among leaders, but the decision to enforce mandatory quarantines for health workers returning from the region was an overreaction. She said this fear can be brought to an end through the right messaging.

While politicians and healthcare workers do the battle of the minds, a physical battle is reported to be taking place in some schools. The Associated Press reported through the Huffington Post this week that two boys who had recently immigrated to the U.S were attacked at a school in the Bronx, New York, after an American doctor who had worked in West Africa was admitted to a New York hospital.

As Ebola continues to create confusion between the U.S government and some state governors regarding the correct policy that should be implemented to contain its spread, The African Advisory Council, a group that advocates for Africans in the Bronx, posted a statement on Facebook calling for an end to the stigmatization and violence against Africans. The group demanded that Africans be accorded same protections guaranteed under the law to all U.S citizens.

3 Responses to "Ebola Spreads Confusion on Containment Policy in U.S."