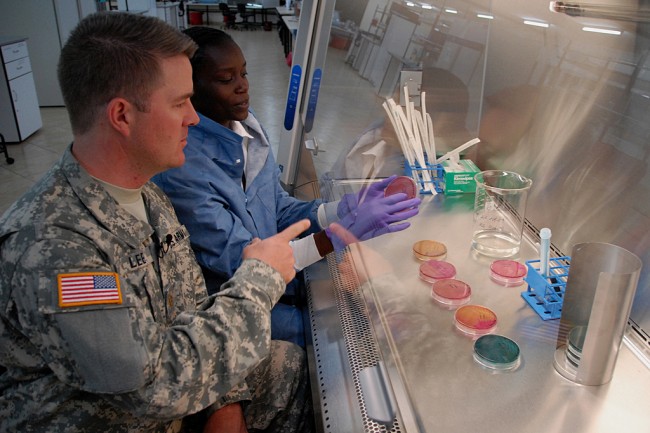 Studies into a vaccine for Ebola is finally underway in Maryland. The news comes after the contagious disease is spreading into the western world. Officials are worried that it will be catastrophic to people everywhere.

Despite the disease being known about since the 1970s, there has been no vaccine to treat it. Between 1976 and today, the outbreaks were too small for any major drugs company to even consider testing a vaccine. There have been too many other major concerns around. There have been a small number of scientists testing drugs, including University of Texas Medical Branch professor Thomas Geisbert.

It was really only after the 2001 terrorist attacks that government funded studies started. The worry was that terrorists could opt for a biochemical attack instead of a physical one. However, the push to larger clinical trials for the Ebola vaccine has only come from the biggest outbreak of the disease in history. Over 3,000 people have already died in West Africa, and the disease shows no signs of stopping.

The new Canadian study will be carried out on human trials. There are currently no approved treatments, which means experimental medications have been given to patients. There are a range of potential therapies available at the moment, including two types of vaccines.

Both of these Ebola vaccines have studies now underway. The Public Health Agency of Canada has created one of them, and started testing on Monday this week. It is a vesicular stomatitis virus (VSV), which can work within the body to treat and even prevent the disease.

GlaxoSmithKline is working on the second treatment, which is an adenovirus. The clinical trial for this one started last month, but there is another trial currently underway within Mali. This second trial started last month, despite Mali having no cases of the disease. Mali and Guinea share a border, with the latter being where a current outbreak has started.

Despite there being a study, the vaccines will not be ready for a few months. However, the studies are promising and show that there is hope should more outbreaks occur.

Another treatment that has shown some promise against Ebola is fabipiravir, a drug for influenza. Fujifilm, in Japan, has 20,000 doses of this, and one of those went to a French nurse, part of Doctors Without Borders. She has made a recovery from the disease and is now out of hospital. However, the doctors cannot confirm that the new treatment is the reason for the recovery. More trials are needed. It could be that the excellent care in the French hospital has helped.

Something that is not helping is that different hospitals are following different protocols. Texas Health Presbyterian Hospital has complained that the right protocols to protect staff are not in place. Nurses have been put at risk due to very little training, which is a common complaint around the world.

The Centers of Disease Control and Prevention has admitted that it should have acted sooner. Various authorities and companies are now acting, and studies on vaccines against Ebola are now underway.