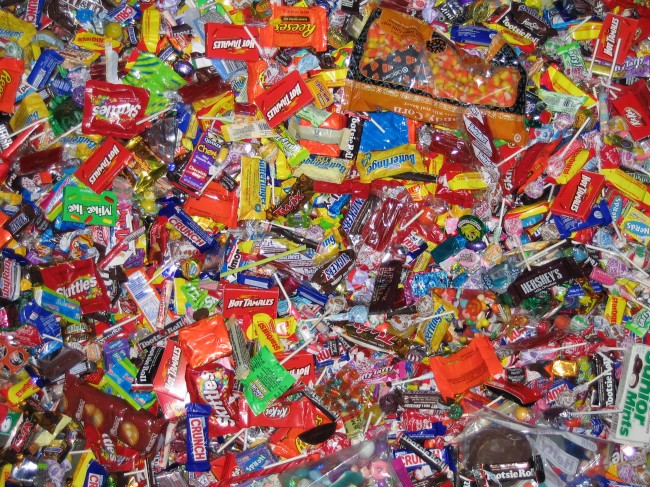 For years, hospitals have offered free X-ray screenings of Halloween candy to look for hazards such as razor blades or shards of glass, but with the legalization of recreational marijuana in some states there may be a new threat to children: pot candy. Rice Krispy Treats, Tootsie pops, caramels, gummy bears and cookies, to name only a few, now come laced with cannabis and some so closely resemble the original product that even experts cannot tell the difference if the products have been removed from their original wrapping.

This year Colorado became one of the states to vote yes on recreational pot, and the Denver Police Department (DPD) is warning parents to be on the lookout. Cannabis edibles may be made from the actual candy, since some manufacturers have found that the most cost-effective way for them to produce their product is to purchase the original candy in bulk and then spray it with viscous hash oil. According to Patrick Johnson, owner  of Urban Dispensary in Denver, there is really no way to tell the difference between the original candy and that which has been infused.

However, some questions exist whether the threat of Halloween pot candy is the latest trick or treat danger, and if it is even a real cause for concern. In 2007 the Drug Enforcement Agency (DEA) raided a marijuana edibles manufacturer in San Francisco, claiming it was protecting children because Halloween was approaching. Three years ago the Los Angeles County Sheriff’s Department issued a warning for parents to watch out for edibles that could be handed out at Halloween. Florida Attorney General Bill McCollum warned parents in 2008 to check their children’s candy for “anything which might resemble one of these new drug forms.”

DPD is considering the threat to be real, even releasing a video that demonstrates how similar in appearance pot-laced candies like Sour Patch Kids and gum drops are to the real thing. The video shows Johnson explaining why parents need use vigilance in monitoring the candy their children get on Halloween, especially because edibles are such big sellers since pot legalization. According to Johnson edibles now account for between 20 and 30 percent of their sales.

A Children’s Hospital of Colorado pediatric emergency room doctor, Dr. G. Sam Wang, said that he is worried about the first Halloween since the increased accessibility of recreational marijuana dispensaries in Colorado. He said that in the past couple of years they have seen increasing numbers of kids with edible overdoses. Wang says this is one of those things that they are keeping their eyes open for this October.

For a very long time parents have drilled into their children that they should not eat anything from their trick or treat bag until they get home and the candy can be checked. That advice still holds true according to the DPD, along with the caution to not eat anything homemade or that is not in its original packaging. Gone are the days of popcorn balls, cookies and Rice Krispy Treats being the prizes of trick or treating.