Haven: Episode Five What You Do Not Know Can Hurt You 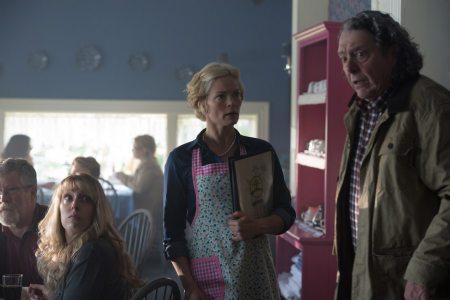 Haven in Episode Five season five, titled The Ole Switcheroo Part 1 proves that what you do not know can hurt you. At least in the sense that if you are keeping a secret from someone else you will switch bodies and in at least one instance of this body swap the result was deadly. At the start of the show, Nathan and Duke are trying to force Audrey out of Mara and Vince is down in Manteo, North Carolina. He is trying learn the significance of the word Croatoan in his brother Dave’s adoption paperwork.

Going to the Croatoan Cafe Vince speaks to the proprietor of the business, Allison Doohan and after going over the original legend of Roanoke, decides to get a coffee. At the same time, Dave has gone to get coffee in Haven and they both swap bodies at a coffee shop type business. Neither of the men know why they have changed and as they are miles apart when this happens both are massively confused. Dave, as Vince, panics and flees the cafe. As he is unused to Vince’s height, he hits his head on the top of the door jam as he is leaving.

Meanwhile, back in Haven, in a psychiatric facility two men, a member of staff and a patient, get into an argument. The orderly chokes the patient to death and then he himself dies. Nathan and Duke opt to stop treating Mara like Audrey in the cabin and the two men decide to take Mara on a case in an attempt get Parker out of her. Nathan finishes by saying that they just need a case to take her to.

Dwight and Gloria change places at the scene of the crime at the mental institute and Dwight tells the coroner “you could stand to go to the gym.” Nathan brings Mara to help and she finds the whole thing very amusing. Dave and Vince both have issues getting under each other’s skin in episode five of Haven. Vince has no idea of what caused the body swap and tells Dave, who is in his body, that he does not know how this happened and he then tells his brother to leave the file alone. Dave accidentally hurts Vince so bad that he knocks him out.

Gloria discovers that if one body swap person dies, so does the other. The place where Vince/Dave is knocked out turns out to be the home of Allison and Skip Doohan who tell the injured journo that they have never heard of any adopted family members and Allison says the house has been in her family for generations.

Both Vince and Dave as well as Dwight and Gloria are trying to figure out how to fix the swapping problem and the first thing they find out is that proximity has nothing to do with switching. Dave was in Haven, 800 miles from Vince when they switched. Duke stays with Audrey, who is really Mara pretending to be Parker.

Allison has a link to Haven as her husband Skip has a brother, Jeffrey, in the mental institute. Nathan tries to speak to the Doohan sibling and the man escapes as Wournos swaps bodies with Duke. By the end of the episode, Vince – as Dave – finds a thinny. The storyline this week was a little hard to follow at times and even felt a little manufactured as this trouble in Haven, the body swapping, has been used in other shows and films.

Despite the fact that in episode five of Haven what you do not know, as in a secret, can hurt you as Vince/Dave found out…twice the plot moved forward at a snappy pace. Special kudos go to Lucas Bryan and Eric Balfour who acted like each other brilliantly. In the show, Wuornos as Crocker was completely convincing as Bryan exhibited the body language and speech patterns of co-star Balfour perfectly and the reverse was also true. While this storyline feels a bit forced, the show is still interesting mainly because of the main protagonists’ acting skills rather than this episode’s convoluted plot.