I Am Ali: Muhammad Ali a Life in Sound (Review/Trailer) 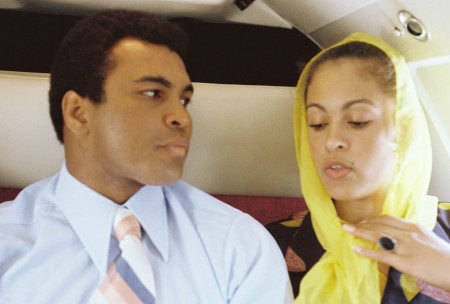 I Am Ali showcases “The Greatest” Muhammad Ali through a life in sound. According to the film and shown throughout, the boxer liked to record his conversations. He taped everyone he talked to, his family and friends especially. These audio clips from different times of his life where he seems to be speaking mainly to his children reveal a side of the boxer not seen by the public before. There are other recordings available to listen to, however, and these also show a depth to the three time world champion many would never believe existed.

Overall, this 111 minute documentary leaves the viewer with the impression that Ali was not just a kind man, or gentle man, but a caring one. His children and his wife all spoke of the boxer being moved to tears by things that touched him. While the film focussed on the man’s whole career, starting back when he was called Cassius Clay, each “snapshot” of his life was intermixed with these recordings he made with his children.

Of course some of the things touched upon in the film are already known, for example, the boxer was an entertainer at heart who knew how to please and captivate the crowds. Ali was more than just a showman and professional fighter though, he was a psychological warrior who often defeated his opponents well before a match. One thing that is apparent, as pointed out by those who knew Muhammad Ali best, in I Am Ali, is that the man loves people and has done so throughout his life, all this may sound like the great fighter is deceased but he is not. The 72 year-old boxer is living in Phoenix, Arizona.

The documentary appears to be a loving tribute by the champ’s children. Each one apparently has great memories of the champion as a father. One of his daughters, Hana, points out that all of her father’s children, some of whom came from outside the marriage, were treated equally and knew of one another. This testament goes a long way to prove that the fighter loved children and enjoyed interacting with them.

Both of his daughters revealed that despite their father’s dominance in the boxing ring, when it came to discipline at home, Ali gave their mother the role of punisher. Daddy was the “good cop” according to both Hana and Maryum. More than just revealing how he dealt with his children, the film showed he cared deeply for kids full stop.

Two stories in particular highlighted his special ability to connect with children. One, which dealt with a boy dying of leukemia and the other story, which was told by Joe Frazier’s son Marvis, showed that when Ali found out that Frazier’s son was upset by the things the boxer had said about his father, he personally apologised and explained that he had great respect for Joe.

While the sound clips of Muhammad Ali’s life are insightful and revealing, it is his children, wife, family and friends who help to round out the information to be gleaned from I Am Ali. There have been some misconceptions about the fighter which may just be put to rest when this film is released on October 10. Fans of the fighter will undoubtedly enjoy the film and for the younger members of the audience, this documentary will explain to them just what all the fuss was about.

One Response to "I Am Ali: Muhammad Ali a Life in Sound (Review/Trailer)"