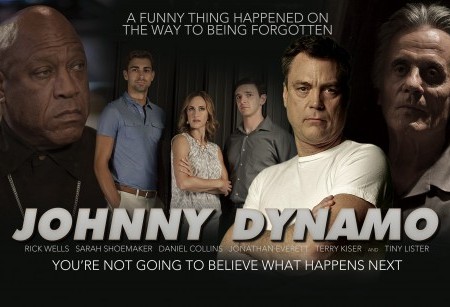 The Guardian Liberty Voice had the chance to speak with one of the Johnny Dynamo star’s Jonathan Everett in an exclusive interview where Jonathan talked to us about working on the series. Everett spoke about what it was like to work with series creator Joe Thomas (The Accidental President, The Body Sculptor), Tiny Lister, Terry Kiser and his some of his other projects as well as the Johnny Dynamo webisode. This “new” web series has proven to be very popular with Variety putting the show on its list of the Top 10 Web Series of 2013.

Jonathan Everett is an actor, director, writer and producer who has worked on several short films, one feature film (Flowers For Fanny) and one TV film – The Accidental President. In 2013 he made his directorial debut for the short film The Heart Heist which he also wrote, produced and starred in. He took time out of his busy schedule to talk about his experiences on season Two in Johnny Dynamo and working with Lister, (The Fifth Element, The Whole World at Our Feet) and Kiser (Weekend at Bernies, The Accidental President). These two guest stars have 322 credits between them in the entertainment industry. Tiny plays Mo Lotto and Terry plays Mickey Petrucelli.

Jonathan plays Jack Meredith on the show and in season one was the main motivator behind his team attempting to bring the former action star Robert Pierce Mitchell, aka RPM, back to his fans. This particular webisode began life, as Jonathan put it, as a ” passion project” that has “kind of spiralled out of control in a very positive way.” The first season of the show featured a youthful trio of fans, in the business, who wanted to see RPM back on screen.

The show dealt with the once famous, now forgotten, star reluctantly working on his re-entry into show business and learning to live with his past. Part of that learning process dealt with his living with the consequences of public humiliation and the loss of his career. The show is set around Nashville and filmed there. As the series starts its second season, RPM has gotten past the first hurdle, his “fall from grace” and is now starting off on his second shot at the brass ring.

In this exclusive Johnny Dynamo interview with Jonathan Everett, the actor talked about what it was like moving into the second season and how he found working with Terry Kiser and Tiny Lister. Jonathan told us that the entire experience was “a challenge at first” and then a “great joy.” He relayed how everyone changed the way they approached things once they started working with Kiser, who was on set first for his scenes in February. The reason? “No one had worked with anyone who had been in the business that long before and it forced everyone to ‘step up their’ game.”

While fans are having to wait to see just where the show is heading this time around, the trailer does give some hint of what is to come. Missing money, a mobster and threats of violence seem to be the standard procedure according to the short clip. There also appears to be a little dis-satisfaction within the Johnny Dynamo’s star’s family where his wife is not happy about the recent turn of events. The trailer also hints at mobster violence of the “horse’s head” type.

Season two of Johnny Dynamo will premiere “sometime” this quarter and in his exclusive interview Jonathan Everett told us about his upcoming projects, one of which is Joe Thomas’ next film, The Body Sculptor which has Tiny Lister, Terry Kiser, Sarah Shoemaker, Rick Wells (RPM) and Jonathan in it. Fans of the webisode should keep their eyes peeled for Johnny Dynamo to be aired on a platform other than YouTube as Everett revealed that the episode lengths are due to increase and the show’s producers are looking to diversify the choices that fans have to watch the action. You can hear the interview on the sound clip below the season two trailer.