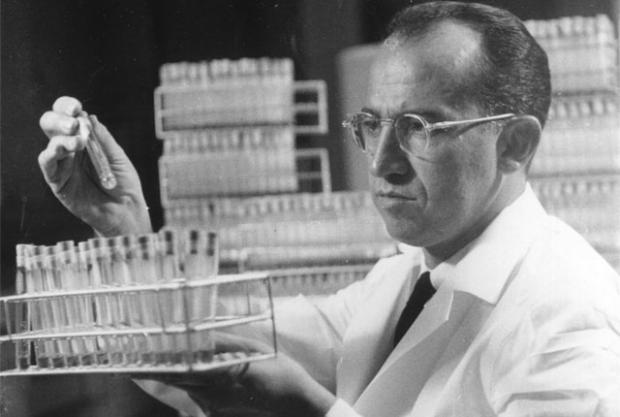 Jonas Salk, an American virologist and visionary, who was born 100 years ago on Oct. 28, 1914, developed the world’s first safe and effective polio vaccine. In celebration of Salk’s birth, here are some surprising facts about the vaccine that has nearly eradicated one of the most dreaded diseases of the 20th century, as well as some background about the polio vaccine’s creator.

While polio might have been one of the most feared diseases of the 20th century, it was never the raging epidemic portrayed in the media, not even at its height in the 1940s and 1950s. During that time period, 10 times as many children died in accidents and three times as many succumbed to cancer. The reason that polio was so feared is because it struck without warning and medical experts were unsure of how it spread from person to person. In the years following World War II, polls found the only thing Americans feared more than polio was nuclear war.

Future President Franklin D. Roosevelt contracted polio while on vacation in 1921. The disease left both of Roosevelt’s legs permanently paralyzed. He was 39 at the time. In 1938, five years after he was elected to the White House, Roosevelt helped to create the National Foundation for Infantile Paralysis, which would later be renamed the March of Dimes. The foundation would become the primary funding source for Salk’s polio vaccine trials. The March of Dimes would become one of the most successful grassroot organizations to date via the use of “poster children” and enlisted star power from celebrities, such as Mickey Rooney and Mickey Mouse. The foundation was run by Roosevelt’s former Wall Street law partner, Basil O’Connor, and succeeded in raising more than $20 million per year by the late 1940s.

Polio creator Jonas Salk not only managed to develop a vaccine to eradicate one of the most dreaded diseases of the 20th Century, he proved to be a visionary in his methods while doing so. The common theory among scientists at the time was that effective vaccines could only be developed via live-virus strains. However, Salk developed a “killed-virus” vaccine by growing samples of the virus, and then, deactivating or killing them by adding formaldehyde so that they could no longer reproduce.

Once the inactivated virus strains were injected into the bloodstream, the vaccine prompted the body’s immune system into producing protective antibodies without the need to introduce a weakened strain of the virus into otherwise healthy patients. While Salk encountered many detractors along the way, there was public pandemonium and urgent need to develop a cure for the crippling ailment. Ultimately, this fear hampered the time-consuming process of developing a live-virus vaccine and put the resources of the March of Dimes behind Salk and his killed-virus cure.

Salk’s first test subjects were a large sampling of monkeys, followed by injecting himself and his family with the vaccine as human test subjects in 1952. In addition to administering the vaccine to child polio victims in the Pittsburgh, PA-area, Salk injected himself, his wife, and his three sons at home after sterilizing the syringes on his stove top. On Mar. 26, 1953, Salk announced the success of the initial human tests via national radio to the American public.

In 1954, the polio vaccine clinical trial proved to be the largest public health experiment in the nation’s history. By the Summer of 1954, nearly 2 million people, including hundreds of thousands of schoolchildren who were deemed most vulnerable to the disease, joined him in becoming “polio pioneers.” For the first time, researchers implemented the double-blind method, which is now standard practice in clinical research studies, in which neither the patient nor researcher that administered the inoculation knew if it was a true vaccine or placebo injection. Although no one was certain that the vaccine was perfectly safe at the time, there were plenty of volunteers hoping to help researchers find an effective cure for polio.

On Apr. 12, 1955, the day Jonas Salk, the polio vaccine creator and visionary, declared his vaccine as safe, effective, and potent, the virologist informed legendary CBS newsman Edward R. Morrow that the vaccine was a gift to the American people and it would not be patented. In the six decades that have followed, lawyers for Salk’s foundation have investigated the possibility of patenting the vaccine, however, they have not pursued it, due to Salk’s expressed wishes.

Nearly 60 years later, Jonas Salk’s creation of a safe and effective polio vaccine has resulted in the disease being eradicated from most regions of the world. According to the World Health Organization (WHO), there were only approximately 400 reported cases of polio worldwide in 2013, mostly confined to limited regions of Asian and African countries. Once Salk’s rival, Albert Sabin, perfected his live-virus polio vaccine in 1962, it briefly usurped Salk’s visionary vaccine method. However, medical experts have come to believe that Sabin’s live-virus vaccine is responsible for about a dozen new cases of polio every year. Moreover, the live-virus vaccine is also seen as the final obstacle to eliminating the disease from the planet. Therefore, the WHO has urged polio-free countries to return to Salk’s killed-virus polio vaccine. As the world memorializes Salk’s milestone birth, the visionary creator and the polio vaccine he developed has nearly eradicated one of the most dreaded disease of the 20th century from the planet.

Other Articles Penned by This Author:

One Response to "Jonas Salk: Polio Vaccine Creator and Visionary"