British power band, Kasabian, closed the U.S. leg of their world tour in support of their latest album, 48:13 at the House of Blues in San Diego on October 9. 48:13 is the band’s fifth album, which is just as hard-rocking as their previous endeavors. Kasabian, though generally tagged as alternative rock, is of a crop of bands which ascribe to a more 80’s hair band mentality when it comes to their music, somewhat like The Darkness, but not quite as hokey. Bands like Kasabian are known for their raucous and exceedingly fun shows, and after a long tour there was no slowing down at the San Diego House of Blues tour closer.

Kasabian has been around for quite a bit longer than American fans may know. Guitarist and sometime singer, Sergio Pizzorno, founded the band in 1997 with vocalist Tom Meighan and bassist Chris Edwards. They went through an apparent gallery of drummers before finding Ian Matthews in 2004, just in time for their first studio album, Kasabian. Jay Mehler performed with the band as rhythm guitarist from 2006 until late 2012, but left to join up with fellow British rocker Liam Gallagher’s new outfit. The band also had a keyboardist, Chris Karloff, who left the band in 2006. Since then, Pizzorno has normally performed the keyboard parts.

Kasabian gave the band their first two hit singles, Club Foot and L.S.F. They released three more albums in the subsequent seven years: Empire, West Ryder Pauper Lunatic Asylum and Velociraptor! West Ryder Pauper Lunatic Asylum, released in 2009, has garnered the most attention to-date for Kasabian, having reachine on the UK Albums Chart and earning them the Brit Award for “Best Band.” They also teamed up with Noel Fielding of The Mighty Boosh fame for their most popular video, Vlad the Impaler, which was also directed by now well-known writer and Director Richard Ayoade.

Velociraptor! released in 2011 and did not earn as much commercial success as West Ryder Pauper Lunatic Asylum, but Kasabian are hoping to make up the difference with 48:13, released in June of this year. The first single off the album, Eez-eh, has the backing track of a 90’s rave but with the band’s characteristic Brit-rock lyrics and vocals. Reception has been mixed, but fans of the band remain as loyal as ever, as is evidenced by their shows.

Before starting their North American tour in September, Kasabian debuted 48:13 at large venues like the Glastonbury Festival, where they headlined the “Pyramid Stage,” and a hometown, venue-busting show in Leichester, from where all the band’s original members hail. The U.S. and Canada tour began in September in Boston, with dates across the country and in Toronto and Vancouver, culminating in their show at the House of Blues in San Diego.

The tour closer in San Diego on October 9 was as energy-filled and highly charged as expected, with the venue packed full of die-hard Kasabian fans. It might seem surprising that as far away as Southern California, the band would have as many devotees as it does, but Kasabian fans are very loyal. Almost every song turned into a sing-along, as it seemed every person in the room knew the lyrics just as well as Pizzorno or Meighan. 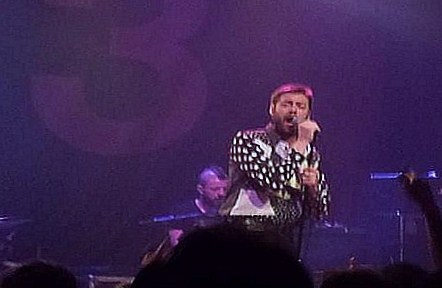 The House of Blues was a perfect venue to host the band, as it was big enough for the huge sound they produce, but not so big that fans felt disconnected from the action. In keeping with the new album’s theme, pink lights were the standard throughout, and a huge screen with 48:13 was displayed in pink framed the band. In characteristic style, Meighan was dressed down as the anti-rock god with a conservative haircut. His stage presence was anything but conservative, however as he strutted all over the place with, pardon the expression, “moves like Jagger.” Kasabian is known for their rock swagger, and Sergio Pizzorno also didn’t disappoint in that department either. Whether he was cranking out guitar riffs or taking over on lyrics, Pizzorno jumped up and down with the excitement of a kid on the last day of school. New touring guitarist Tim Carter provided backing rhythm guitar and a few solos, which freed Pizzorno up to be even wilder, and address the crowd with thanks and prompts to dance and jump with him.

The band played for over two hours, covering a marathon number of songs including ClubFoot and ending with the most popular, L.S.F. and Vlad the Impaler in the encore. Also in the encore was a seemingly impromptu cover of Praise You by Fatboy Slim, for which the crowd went mad. Pizzorno ended the show by thanking the audience and saying he was thrilled with their choice to play the San Diego and the House of Blues as the last stop on their North American tour.

With the energy level so high and the band so enthusiastic, it was surprising to hear that the San Diego show at House of Blues was the end of a 30-date tour. On the 10th anniversary of Kasabian’s first album release, it seems they are just as passionate about rock and roll, their own music and, above all, fun, as ever. Kasabian will continue touring Europe and the United Kingdom this winter. Links to tour dates and where to buy 48:13 can be found in the “Sources” list.