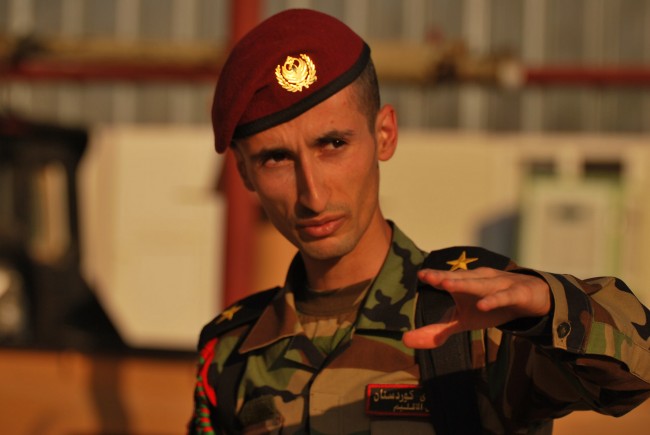 Ten Peshmerga, Iraqi Kurdish troops, were allowed to cross the border through Turkey into Kobani (Syria) to assist in the fight against the Islamic State (IS). The Peshmerga are joining fighters from the Free Syrian Army who have been holding the town for the last six weeks with the assistance of U.S. Airstrikes. The original ten who crossed the border will decide where the rest of the troops should follow.

The Syrian Kurdish fighters who were already in Kobani had been asking for more weapons and ammunition according to Safeen Dizayee, a spokesperson for the regional government of Iraqi Kurdistan. The United States granted this request with 27 airdrops that, in addition to ammunition and guns, also carried medical supplies. According to Dizayee, the well armed Iraqi Kurdish troops were sent out of “duty” and are only meant to play a “supporting role.”

According to the Center for Middle Eastern Strategic Studies in Ankara’s analyst Oytun Orhan, the Syrian Kurds agreed “reluctantly” to the assistance of the Peshmerga and the FSA and are concerned that the number of fighters will “challenge their rule” in Kobani. Currently there are 400 FSA fighters in Kobani and they make up roughly a quarter of the force fighting the Islamic State. These numbers have made Syrian Kurds nervous and they have requested that the number of troops deployed to their aid be as minimal as possible.

The Syrian Foreign Ministry has accused Turkey of violating their state sovereignty by allowing foreign fighters to cross and enter Kobani through its borders. Turkey originally refused to help as it considers the Syrian Kurds who have been defending the border an extension of the PKK which has been waging an insurgency against the Turkish government for 30 years. The intention of which is to gain autonomy from Turkey. It is considered a terrorist organization by the United States and NATO. However, under increased pressure from both the United States and the Kurds, Turkey changed its position.

According to activists, IS group attacks on Kobani and villages nearby have resulted in over 800 deaths and thousands of refugees fleeing into Turkey. The war raging in Syria has been responsible for the deaths of over 200,000 people since its beginning in 2011. Kobani is very important regionally. It is a small border town between Syria and Turkey and is the main gateway into Turkey. If the IS controls Kobani, it will have complete control of over 60 miles of territory along the Turkish border.

More troops are set to enter Kobani after the arrival of the 10 Peshmerga including 150 more Iraqi Kurds and 50 FSA. These forces combined with the 2,000 troops already defending the town and continued air strikes by the United States are hoped to be able  to turn the direction of the fighting out of the Islamic State’s favor.

The IS has held the advantage so far in the fight for Kobani. They have superior weapons and manpower and those fighting against them are doing so with outdated weapons and sparse numbers. There is also concern that United States airstrikes are not as effective as they are needed to be. Airstrikes are not always accurate and getting a fix on targets is more difficult. Turkey allowing Peshmerga troops to cross through its borders into Kobani will help to equalize the forces. However, there is still doubt that it will be enough.