Last Will and Testament : What You Need to Know 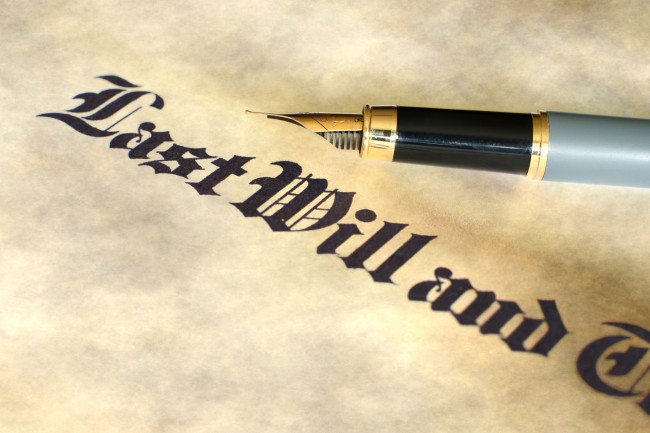 “Dear Friend: After doing an intensive search for a trusted person, I was given your name and wish to discuss with you a highly confidential matter. Our king recently died and left $14 million dollars in his estate. His last will and testament dictates that we find someone trustworthy, like yourself, to help get the funds out of the country.”

The only person who has not seen a scam like this is someone who has not been online lately. Internet security experts estimate that as much as $1.5 billion is lost each year to email scams. Roughly half of that money disappears into the pockets of someone claiming to be the executor of a wealthy individual’s last will and testament.

While relatively few internet users fall for the scam, enough are fooled to make the scam perpetual, and profitable, for the people sending it out.

Sometimes the question of a personal “last will and testament” can be layered in confusion as well. What can I leave to whom? What do I need to do to draft a valid will? Is a out-of-the-box-will as good as one drafted by an attorney?

For most people, a last will and testament is one of life’s things that they would rather have and not need than need and not have. When thinking about a last will the options are available fall along a continuum of choices.

On one end are the do-it-yourself kits that can be picked up for a few dollars in any office supply store and appear to include everything needed when writing a last will. On the other end resides the high-dollar attorneys who may charge $1000 — or more —. Everyone’s needs fall somewhere in the middle along that spectrum.

If you been waiting to write your will because you do not want the expense of an attorney, going online may help. Many people requiring just a very basic will have the option of creating one online or buying the blank forms locally. Both methods are less expensive than hiring an attorney.

Online last will makers fall in the $20 to $100 price range. Ready made forms sold in office supply stores can go for as little as $5 to $20. To compare, an attorney may charge from $100 to over $1,000, depending how where you live and how complex your situation is.

While a DIY will can be useful in the most basic circumstances, there may be some problems which go unnoticed and unchallenged — until the last will is read.

One example was the famous CBS newsman, Charles Kuralt. Shortly before he passed away in 1997, Kuralt wrote a note to his long-time significant other, Patricia Shannon. They had been together for almost thirty years and, in the note, Kuralt promised to leave her 90 acres close to a fishing retreat in Montana that they had visited together often.

When Kuralt died, his family and Shannon fought for six years over the validity of the note. Was the note a valid amendment to the 1994 will which Kuralt’s attorney prepared, or was it merely a promise to revise the document. A Montana judge never addressed the issue. Instead he awarded Shannon the $600,000 property. Kuralt’s family got stuck with the estate taxes.

In Texas recently, a man tried to save some dollars and wound up losing his $3.5 million estate tax exemption. Using a DIY form, he pulled together a will and left $7 million to his spouse. No estate taxes were due then because assets left to a spouse, or charity, are not normally subject to estate tax. However, anything leftover when the spouse dies could be taxable as part of her estate.

To try to rectify the problem after the husband died, a lawyer in McKinney, Texas, advised the wife to turn down the entire $3.5 million exemption and allow it to slide under state law straight through to their adult sons.

If the man had talked to an attorney before he died, he may have been shown a better, more flexible, method to apply the tax exemption. The lawyer might have helped the man set up a family trust that could be funded when the first spouse dies and then the wife could have received the income from the trust.

The belief that a DIY will is better than no will is only partly correct.

Without a will, even a DIY will, minor children with a single or surviving parent, will have a guardian appointed for them. State law will determine how most of the belongings are shared.

Whatever is leftover after taxes would be distributed according to the law of intestacy. This law, with some variations between states, sets up a pecking order of inheritors of people who die without a valid will. Some states say everything goes first to the surviving spouse, then children, parents and siblings. Many states though still divide an estate in pre-determined percentages between the surviving spouse and children.

A DIY will does not notify you of those options.

There are some circumstances in which a person will want to hire a lawyer. Typically, it is best to get an experienced estate attorney involved if:

1. You have a large estate
2. You want to disinherit a spouse or children
3. You are concerned that someone may claim that you weren’t mentally sound when you drafted and signed the document

Other circumstances which dictate the hiring of an attorney are when you want to have an advance medical directive in place or assign someone financial powers of attorney.

Even with online, or store bought, wills, you may still want to get an attorney to review it when you are done and before you file it with the state. Having a trained attorney review the document could help discover a mistake you made. If you believe that mistakes are rare without the guidance of an attorney, do some online research. Do-it-yourself will services are named in hundreds of lawsuits every year for mistakes that were never caught until it was too late.

Remember, there is a continuum of ways to create a last will and testament. From the do-it-yourself to retaining a lawyer to do the entire package. A DIY will is simple, but how an you be sure without the know-how of an experienced estate lawyer?

2 Responses to "Last Will and Testament : What You Need to Know"