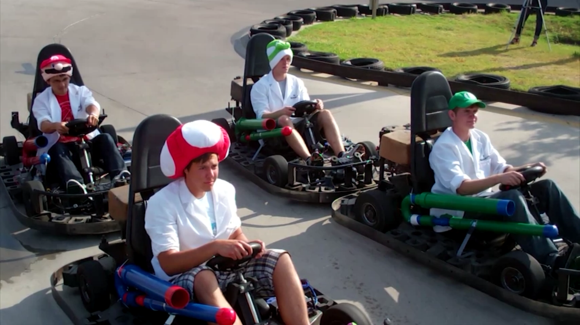 Fans of Nintendo’s Mario Kart series can now experience the racing madness in real life. Razor, who produces a number of children toys such as scooters, has now revealed Crazy Cart XL. The new cart is an expanded version of their smaller design, adding a host of powerful features and ability to drift, much like in the game. Previous attempts by the Waterloo Labs also managed to get the iconic power ups functioning, getting ever closer to a real life Mario Kart.

The official video released by Razor demonstrates the numerous additions to their latest cart. The size has been nearly doubled from their previous model, giving more space and comfort to accommodate even adult riders. Yet, it still remains narrow enough to fit through most standard doorways. The power and quality have also been boosted, upgrading to a 500 watt motor and a quick-change battery conveniently placed under the seat. However, the best feature is perhaps the drift bar, a simple handle that rises the back of the cart allowing for drifting across turns. Combined with a variable-speed gas pedal and turning wheel that can go over 180 degrees, the new cart provides extreme maneuverability as well.

In a nutshell, Razor has taken its child’s toy and turned it into a powerful cart machine for adults, designed around a 6’3’’ and 250-lbs driver. As the video further demonstrates, the fast-paced racing and drifting the fans have enjoyed in Mario Kart can now be transplanted to real life. Spinning in place, riding backwards, drifting across sharp turns and navigating narrow passages are just some of the moves the fans of the series might joyfully recognize and recreate.

Mario Kart started its life on the Super Nintendo Entertainment System back in 1992. Taking a number of recognizable Nintendo characters, from Mario to Bowser, and putting them in tiny little go-karts proved more than just a comical contrast. With simple yet refined racing mechanics, several themed tracks and various power-ups that kept the winning player on their toes, the game quickly grew to be a classic. It has now seen various iterations on almost all subsequent Nintendo consoles and handhelds, with the latest Wii U version selling over one million units in the U.S. two months ago. The publisher said the 8th iteration of Mario Kart has been driving “the momentum for the the Wii U platform.” It is no surprise it inspired many die-hard fans to recreate the experience.

Razor is not the first one in such attempts. A group of designers and engineers at Waterloo Labs modified four go-carts in 2013, adding pneumatic systems that could override the controls. By tossing various plush toys embedded with special RFID tags and shaped like shells or bananas, the racers could thus send the opponent into a control-less whirlwind iconic to the video game. Thus, the Mario Kart power ups came to life.

Razor, however, is focusing on the carts themselves rather than external additions. They are starting with a pilot launch of only 1600 units that will not be shipped to stores, but available both through their official Razor and Toys R Us websites. The price point of $800 seems steep, but can one really put a price on the youthful fun and nostalgia the “toy” can bring? The carts should be available sometime in December, just in time for Christmas.

While go-karting has been a fun pastime for several decades now, few provided the crazy maneuverability of the Razor cart. With inherent drifting and complete 360 spins, the new ride will bring a lot of joy to the 1600 customers who decide to grab it this year. Now that the machines are ready and the power-up technology has also been proven, fans just need to wait for someone to recreate the iconic stages for a complete and crazy experience. Helmets will undoubtedly be strongly advised!