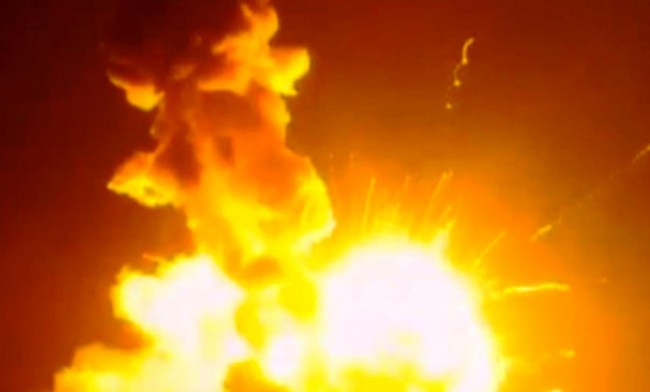 NASA officials held a press conference at 6:00 p.m. EDT, Oct. 28, 2014, to express their regrets about the Antares rocket explosion incident, which occurred earlier in the day at the Wallops Flight Facility in Virginia, as the Orbital Sciences space vehicle prepared to launch its third resupply mission to the International Space Station (ISS). Four senior administrators fielded call-in questions from members of the press, providing reassurances regarding the ISS supply inventory, explaining that they need time to investigate the accident before they can speculate as to when they might attempt another launch. They further warn nearby residents that any found debris may be dangerous and should be reported immediately.

NASA executives Bill Gerstenmaier, Bill Wrobel and Mike Suffredini expressed disappointment at the failure of the resupply mission but are committed to another launch attempt once the investigation sheds light on today’s setback. Frank Culbertson, Executive Vice President of Orbital Sciences regrets their inability to fulfill their contract to ferry supplies to the ISS. Gerstenmaier assures the public that even without the supplies, the ISS crew is in no danger of exhausting their supply of food and critical supplies. They have sufficient supplies to last until March 2015 and both a Russian and a SpaceX cargo ships are scheduled to visit the station before then.

Although grateful that no lives were lost, NASA officials explained to the press conference participants that the supplies and research hardware aboard the Antares rocket and the physical damage to the ship and ground installations run into the hundreds of millions. None of the cargo was critical, but they will not be able to fully assess the monetary losses until tomorrow. They warn the public to refrain from searching for souvenirs of the explosion or touching any found debris that turns up in the area as the rocket was carrying hazardous material that could be dangerous to handle.

In spite of this calamity, Gerstenmaier maintains confidence in Orbital’s competence and ability to recreate their earlier successes. He explains that a rocket launch is a complex and difficult operation that requires those involved to learn from both failure and success. Therefore, he remains undaunted in the determination to move forward in re-establishing cargo missions from the U.S to the ISS. Officials at NASA’s Wallops Flight Facility in Horntown, Virg. are investigating the cause of the accident and what it will take to get the launch pad fully operational again. The process could take a few weeks or more.

Culbertson states that Orbital Sciences has also convened an investigative board to conduct a comprehensive investigation with the goals of discovering the cause of the Antares rocket explosion and detailing the steps necessary to avoid a repeat performance. They are activating contingency plans to secure the launch site, flight data and telemetry from both the Antares rocket and the Cygnus spacecraft. The National Transportation Safety Board (NTSB) will monitor the investigation. Once they understand the cause and can assure the safety of future launches, they announced to the attendees of the press conference that they will do whatever is necessary to restore flight capability to the NASA space program.