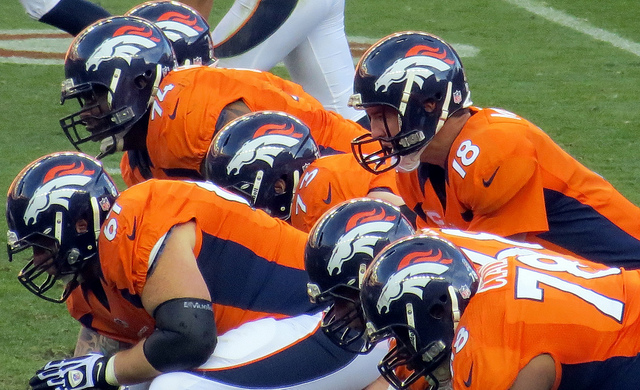 Peyton Manning of the Denver Broncos has made history! Manning has taken sole possession of most career touchdown passes, which was set at 508 by Green Bay Packers’ legend Brett Farve. As of Sunday night’s football game against the San Francisco 49ers, this record will only continue to increase as long as Peyton Manning is on an NFL roster, and he will continue to be the NFL’s All-Time Touchdown Pass Leader. The record was broken in the second quarter.

Touchdown number 508 was to no. 83 Wes Welker. Welker has been quiet since his return from his suspension, but Manning threw a 39-yard pass to the wide receiver who managed to squeeze the ball into the endzone with 2:57 left in the first quarter.

Demaryius Thomas was the receiver that caught Peyton Manning’s 509th career touchdown and record-breaking catch with 3:09 left to play in the second quarter. Manning set five receivers into the end zone and all of them were covered by the 49ers’ defense. Thomas was able to outrun his defender, and Manning threw the ball eight yards to the wide open receiver. This touchdown also led to Manning’s 89th game where he completed at least three touchdown passes. Following this touchdown, the Broncos led the 49ers 21-3.

Peyton Manning signed with the Broncos in 2012. Since then, he has thrown 110 touchdown passes. Manning has been in the league since 1998, and many NFL fans are anxious to see just how high he will set the record for the next record-breaking contender. Currently, the New Orleans’ Saints’ quarterback Drew Brees in the next current quarterback who will have a chance on breaking Manning’s ongoing record.

Manning is currently 135 touchdowns ahead of Brees, who only has 374 career touchdowns. Brees has a long wait ahead of him to see where Manning will set the final number for the most career touchdown passes. New England Patriots’ quarterback Tom Brady is right under Brees with 372 touchdown passes. The two quarterbacks are looking to break Dan Marino’s touchdown record of 420 and will have to focus on breaking Brett Farve’s record of 508 before they can even attempt on breaking Peyton Manning’s record.

While the future hall of famer will be taking home his record-breaking football, there is still one goal that he needs to achieve as a Denver Bronco. Peyton Manning fell short in last year’s Super Bowl against the Seattle Seahawks, but NFL fans are fully aware that this year’s Denver Broncos are a completely different team. With Peyton Manning leading the way, this 2014-2015 Broncos roster should be the one to bring a Super Bowl win to Denver.