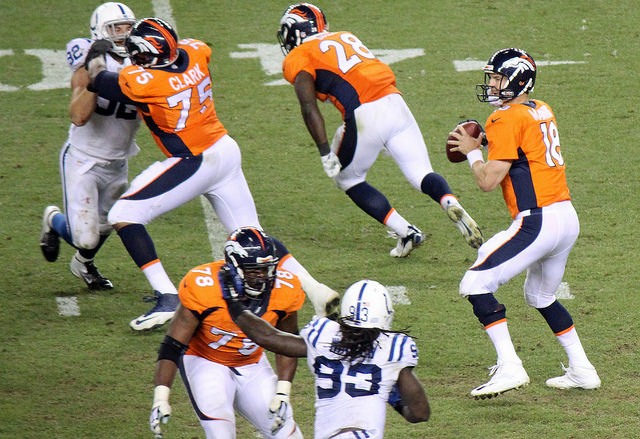 Peyton Manning is playing the San Francisco 49ers on October 19, 2014. Today will forever be known as the day that Peyton Manning breaks one of the hardest records to break in all of sports. There are few quarterbacks in history that could even be in the same talks as being better than Manning. Numbers do not life, and according to numbers, Manning is now the greatest quarterback in football history.

A man named Brett Favre still has a place in football history, and may still have a place in the question of who is the best quarterback of all time. He was the previous record holder at 508 touchdown passes. He achieved this is 302 career games. Peyton was able to break the record in only 246 career games. He still has a number of unbelievable records that have yet to be broken by any other quarterback. He has the most passing yards of all time at 71, 838 yards, the most completions, interceptions, starts, and pass attempts. His most famous record is his consecutive starts record at 297 consecutive starts. This record gave him the title as the “iron man” of football.

The most important record for football is undoubtedly the most touchdowns ever, and Manning breaking this record is just as amazing as the stories that went with the journey. He gets drafted number one overall to the Indianapolis Colts in 1998. Manning stayed with the Indianapolis Colts until 2012 after breaking all of their quarterback records. In this year he needed numerous neck surgeries that would make his future in football undecided and not hopeful. When news was given that Manning could play again, the Colts, who had the number overall pick, for the first since drafting him, they decided to draft Andrew Luck and release Peyton Manning. This is when the Denver Broncos recruited the future Hall of Famer. In the next three years he went on to great success and even one more MVP award and took the Broncos to the 2014 Super Bowl.

Favre’s story did not come of age as similar to Manning’s. Where Peyton was drafted number overall in the 1998 draft, Favre wasn’t drafted until the 33rd pick in the 1991 draft. Favre is most famous for being the Green Bay Packers quarterback, but he was drafted by the Atlanta Falcons and traded a year later to the Packers for a draft pick. For 15 years Favre had a very exciting and record-breaking career breaking records in an exciting way. Favre was known for his free-slinging arm and no fear of taking hits or throwing deep passes. Furthermore, he also owns the league’s interceptions record. Favre retired with 508 career touchdown passes, a record not many experts thought would be broken for a long time.

Manning and Favre can go head to head on who is the better quarterback. Experts will always be split. Peyton holds half of the records and Favre holds the other half. The style with which they handled their business is very different, yet neither is very wrong. Peyton has always handled life with class and poise. Favre has always been a wild slinger and a country boy at heart. There are still rumors running around that Favre wants to return to the NFL, and that’s who he was, a man who will never give up. Manning has shown that whatever he wants to, he will do it and be the very best at it. Manning versus Favre will forever be a talk of greatness.