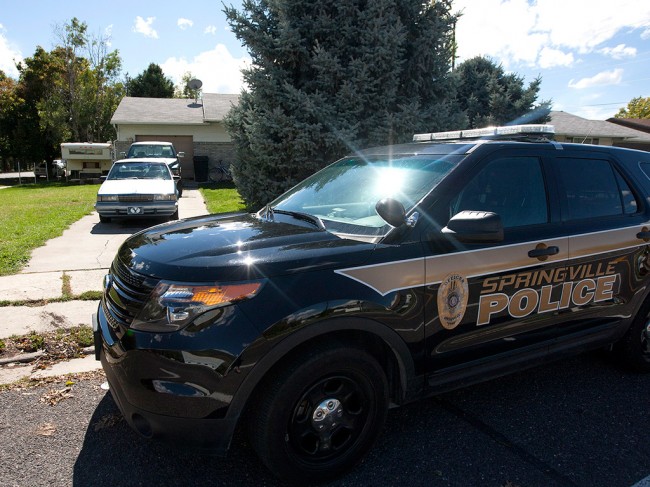 Reports that officially came out over one month ago, which stated that there was no evidence of foul play in the case of a Utah family of five found dead in their home, have now been changed. Police are now making statements that there may have been foul play in the deaths of the family, whose autopsy reports indicate they died of poisoning, although the toxicology screen has not yet come back. As police continue to investigate, they are now searching for evidence that will lead them to a possible suspect who may have been involved in the family’s death.

About one month ago, the Strack family was found inside of their Springville home. The family – a man, a woman and their three children – were taken to the coroner for autopsies. Shortly after, firefighters searched the home for gases, carbon monoxide or any other silent killer that could have been the reason for the death of the family of five. Nothing was found, but due to lack of evidence of a break-in or murder by weapon, police did not at the time suspect that this was a murder.

The tune has changed, however, now that autopsy reports are expected on the family of five, although toxicology reports have not yet come back with the exact type of death. It turns out, according to police, that the family may have actually been poisoned, which was the cause of death. Though it is still not certain whether or not one of the deceased parents may have been involved in the tragedy, police do know for sure that their deaths were no accident.

At the time, the scene suggested as much, and police stated that it looked like the bodies had been ‘staged’ after death. The family of five, which was found by an older son and the deceased wife’s mother, were all five tucked into bed. However, suspicions of the things found around them led the police to believe that it may have been poisoning. Police stated that it was not normal for the kids to be in the parent’s room because they had their own room.

There were many different types of paraphernalia found next to where the family of five was, including methadone bottles, ten types of cold medicine, two types of allergy medicine, a red liquid substance in cups, a pitcher of red juice, a purple bucket with yellow liquid, sleeping pills and other medication, and marijuana. Recently, police obtained a search warrant to search the house, where they found and obtained all of those suspicious things.

Statements taken from the mother of the deceased wife, Kristi Strack, suggest that she believes that her daughter did this to the family. The mother stated, “I can’t believe she would do this to the kids.”

Though suspicions are surrounding the wife, police statements that somebody positioned the bodies after death points to another suspect. Though an exact cause of death will not be known until the toxicology report comes back, and no motive is currently known, police are working hard to gain further knowledge in the case. However, it is clear to them now that the death of the family of five was no accident, as they now suspect foul play in their deaths.