Roger Federer Closing in on ATP No.1 Ranking After Basel Win 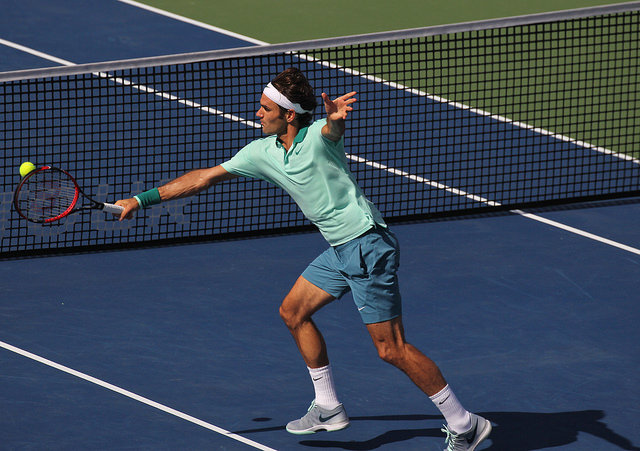 Roger Federer is closer to claiming the ATP No. 1 ranking after winning the ATP 500 Swiss Indoors tournament in Basel. The win, an improvement on Federer’s 2013 runner up spot, earns the Swiss 500 ATP ranking points. Federer now has 9,280 ATP ranking points, and is 2230 points behind world No. 1 Novak Djokovic who has 11,510 points.

Federer beat Belgian David Goffin, ranked 28th going into the event (now ranked 22), 6-2, 6-2 to claim his fifth trophy of the year (Dubai, Halle, Cincinnati, Shanghai) and improve his chances of finishing the No.1 ranked player on the ATP rankings for the sixth time in his career, equaling Pete Sampras’ record.

Considering that Djokovic has 2500 ranking points to defend at the upcoming BNP Paribas Masters ATP 1000 event in Paris and the ATP World Tour Finals in London, (the world No. 1 is defending both events ), and that the world No.2 has only 760 points, all the pressure is now on Djokovic to repeat his stellar 2013 performances. Federer, meanwhile, has two semi-final positions to defend, and after winning his second title in a row (Shanghai, Basel), the chances of him not improving on those performances are slim.

If the Swiss wins in Paris-Bercy this week, an event offering 1000 points to the winner, and Djokovic loses before the final, Federer would go into the ATP World Finals leading the race. And if the 17 time Grand Slam champion can reproduce his Shanghai semi-final form and  beats Djokovic in the final, the Serbian would lead by only 90 points.

Federer’s chances of closing the gap between himself and Djokovic in Paris are high. Djokivic will be playing his first tournament as a father and how he will cope with that distraction is yet to be seen. If it is anything like how Federer did when he played the Italian Open this year after his twin sons were born then Djokivic’s No.1 ranking is in trouble- the Swiss lost that match, and went out early at the French Open, too, after leading Ernests Gulbis by a set and a break.

Djokovic has not been helped by a tough draw. His opening round match is against 24th ranked German Philipp Kohlschreiber. The big ball striker may trail Djokovic 1-5 in their head to head but he has taken six sets of him and recently reached the semi-finals of Vienna where he pushed David Ferrer to a third set tiebreaker. He will also feel confident after comfortably beating Edouard Roger- Vasselin in his opening match in Paris. If Djokovic is at all rusty or distracted, Kohlschreiber is experienced enough to take advantage.

Federer, meanwhile, will open up against Jeremy Chardy, his Italian Open conqueror, or qualifier Kenny de Schepper. If the Swiss’ serve holds up as well as it did in the Basel final, Federer should ease through that opening match to win his 13th consecutive match and improve his chances to end the 2014 season as the ATP No. 1 ranked player.