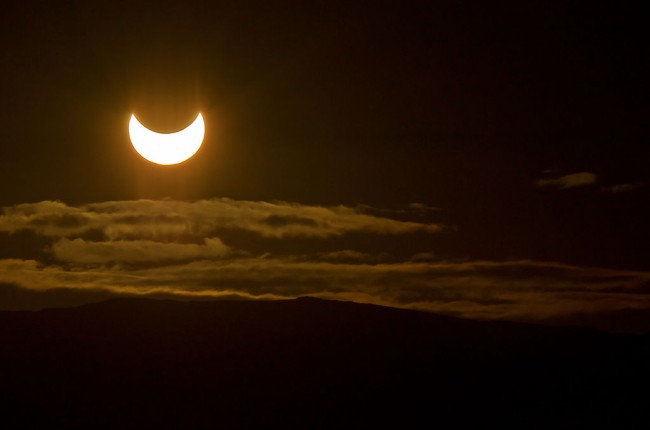 A partial solar eclipse is expected to occur on Oct. 23 after a recent lunar eclipse took place about two weeks ago. In fact, this year has seen numerous astronomical events in regards to the moon and sun. Two total lunar eclipses have taken place, as well as three supermoon phases. Also, two new moons have occurred within the same month, twice. The sun released a few X-class solar flares and is now expected to partake in a partial solar eclipse.

According to Slate, a new moon will pass over the sun on Thursday to reveal a partial solar eclipse visible to most of the continental U.S., if weather permits it. The event is expected to occur around 1:34 P.M. Pacific Standard Time (PST) and peak around 2:59 P.M. The tip of the northeastern area of the U.S. may have difficulty seeing it until around sunset and depending on whether viewers can find a low-lying sunset from their area, according to NBC News.

Slate also reported viewers should take the same precautionary measures used with viewing total solar eclipses with this partial one due to possible eye damage and blindness that can occur. Slate stated there are many ways to view the partial eclipse and NASA and National Geographic Magazine had suggested ways to do so. NBC News also stated viewers should not use binoculars or a telescope without a special filter to view the eclipse as this can also lead to serious eye damage.

The partial solar eclipse comes two weeks after a total lunar eclipse took place on Oct. 8 and was referred to as a “bloodmoon.” According to EarthSky Organization, the full moon eclipse happened in the wee hours of the morning for North America and is the second total lunar eclipse to occur from four expected to take place between 2014 and 2015. A full moon occurring in October can also be referred to as a “hunter’s moon” after a so-called “harvest moon” has occurred in September.

In fact, the harvest moon and two other full moons which took place this year were referred to as a “supermoon” due to the close proximity of the moon to the earth. Also known as a “perigee moon,” The Weather Channel (TWC) stated how NASA explained that some full moons are various sizes due to the elliptical orbit of the moon. Tech Times mentioned these supermoons had occurred on July 12, Aug. 10, and Sep. 9.

The sun has also been active in showcasing events for planet earth. According to NASA, an X-class solar flare took place as recently as Oct. 22, with another one reported to have occurred on Oct. 19. NASA also stated a high M-class flare occurred Oct. 21 from the same active region. The news comes after Space.com reported an X-class flare took place on Sep. 10 and measured X1.6 versus one which occurred in February this year and measured X4.9. Space.com noted an X4-class flare is four times more powerful than an X1 flare.

If these astronomical events were not enough, a moon calendar posted on Moongiant.com shows two new moons occurred within the same month and happened twice this year. Sometimes referred to as a “black moon” (versus a “blue moon” when two full moons occur within the same month), the first new moon occurred on Jan. 1 and reappeared on Jan. 30 and the second one occurred on March 1 and reappeared on March 30.

This year has seen significant astronomical events with both the sun and the moon. Various outlets have reported these events are not considered rare, except for the four-series total lunar eclipses which started springtime of this year and is expected to continue until fall of next year. Also known as a “lunar tetrad,” EarthSky stated eight of these types of eclipse series may occur within this century alone, whereas in other centuries, there may have been none at all. These types of series are measured by taking into account that a partial lunar eclipse did not occur within six lunar months from a previous total lunar eclipse.

A partial solar eclipse is set to occur after a recent bloodmoon eclipse took place on Oct. 8. Even if reports indicate these astronomical events are not considered a rarity, or may even be insignificant, it appears unusual to have so many events occur within one year.