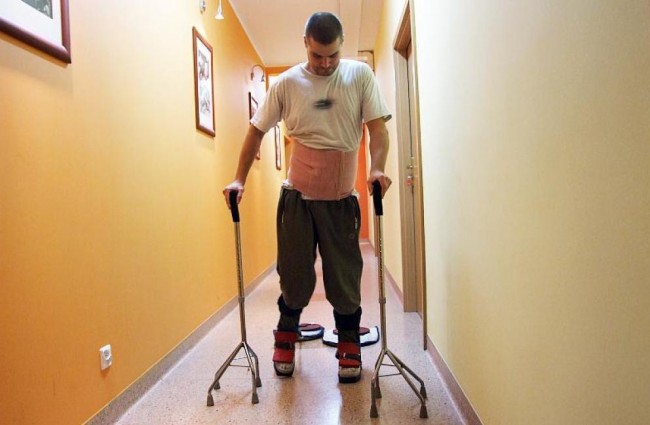 Spinal cord injury has long been accepted as a lifetime sentence of paralysis, but a recent treatment breakthrough gives hope to spinal cord injury patients, stroke survivors and other patients with nerve damage. Darek Fidyka’s spinal cord was sliced cleanly in half when he was attacked at knifepoint in 2010. He has been completely paralyzed from the chest down ever since, but the new  breakthrough in treatment has allowed the Polish man to recover the ability to walk and feel, a worldwide first.  His results possibly give experiments with cell transplantation the potential to achieve drastic improvements  in patient outcomes that physical therapy alone does not achieve. Fidyka’s recovery has doctors and scientists scrambling for funds to repeat the procedure on additional  spinal cord injury patients to prove the treatment has repeatable value that they can expand to cure other chronic conditions in addition to paralysis.

Research by University College London (UCL) Institute of Neurology’s professor Geoffrey Raisman on possible treatments for a spinal cord injury suggested that olfactory ensheathing cells taken from the nasal cavity could help impaired nerve cells establish new connections. Drawing on this research, Polish surgeons, in cooperation with UCL and funded by the Nicholls Spinal Injury Foundation (NSIF) and the UK Stem Cell Foundation (UKSCF), injected nerve cells grown from cultures of cells taken from Fidyka’s nose around the broken ends of his spinal cord injury. Olfactory nerves replenish throughout a person’s life so they will grow back. Doctors used thin strips of nerve tissue from Fidyka’s ankle to create a pathway across the gap in the cord and help the fibers on the loose ends of the spinal cord injury reconnect, a never before accomplished medical feat.

The procedure worked and Fidyka began to experience feeling in one leg after three months and continued to regain sensation in both legs, taking his first steps using parallel bars and leg braces for support, under the supervision of a physiotherapist. Now, two years later, he can walk with a walker outside the care facility, although he tires quickly.  He can also drive a car. He has regained some independent bowel, bladder and sexual function and is optimistic about his chances of becoming independent again, enthusing that he feels “born again” and determined to never give up his quest to fully recover from his spinal cord injury..

Many scientists, including the researchers and doctors involved in the study and treatment of Mr. Fidyka, warn against giving false hope about the efficacy of the treatment without further tests producing repeat results. If recent results can survive further testing and scientists can establish a definitive link to the groundbreaking spinal cord treatment and recovery in the initial human case, however, Raisman is hopeful, seeing abounding possibilities to apply the techniques in treating patients suffering from a wide range of nerve injuries, including stroke damage. Although the jury is still out on whether this treatment will become widespread and generally accepted, Fidyka’s recovery provides inspiration to patients and doctors to keep up the fight for a cure.

Doctors are delighted with the pioneering effort in curing what has long been considered an incurable condition with no hope of recovery. They have high hopes that they will be able to repeat the results and give relief to thousands of patients just surviving day-to-day with chronic spinal cord injuries, strokes and other nerve damage. Neurosurgeon Dr. Pawl Tabakow, leader of the Polish research team at Wroclaw University Hospital is amazed to see the impossible becoming a reality. Raisman acknowledges the challenge ahead in taking an isolated result and turning it into a proven treatment for everyone and that will take money — 10 million pounds, PBS reports. The team hopes to repeat the procedure on 10 more patients without charging the patients a penny for their cure. Fundraising could take several years but Raisman feels the weight of his responsibility to follow through with this discovery that he believes has such huge potential to prove enormously beneficial for a large population of people. Therefore, he and the team are determined to forge ahead and turn their Wright Brothers discovery into a 747 and get spinal cord injury patients out of their wheelchairs and back into their original life.